While searching for interesting David Bowie links, I realized I had to share the outrageous mid-1970s interviews from his Thin White Duke phase. Bowie had a horrendous cocaine addiction at the time. He was paranoid and obsessed with the occult, Charles Manson and Nazis. “I was hallucinating 24 hours a day,” he later said, noting that he had virtually no memory of making his 1976 album, Station to Station. “I know [the studio] was in L.A. because I’ve read it was.” His diet consisted of cigarettes, cocaine, peppers and milk, which I’d guess is why he came to believe that Satan lived in his indoor swimming pool.

Therefore, I must warn you that Bowie’s September 1976 interview with Playboy may give you a contact high. 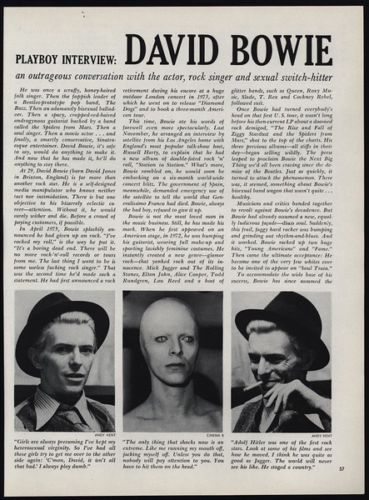 In the Q&A conducted by a still-teenaged Cameron Crowe, Bowie talks openly about his sexuality and drug use before declaring that he’d like to be prime minister and informing the world that Adolf Hitler was the first rock star. He also brags about his ability to manipulate the media, making it unclear which outburst is due to drug-related psychosis and which is for his own entertainment. As Crowe wrote in his introduction to the Q&A:

“He is a self-designed media manipulator who knows neither tact nor intimidation. There is but one objective to his bizarrely eclectic career – attention.”

“[Bowie] is fully aware that he is a sensational quote machine. The more shocking his revelation, from his homosexual encounters to his fascist leanings, the wider his grin. He knows exactly what interviewers consider good copy; and he gives them precisely that. The truth is probably inconsequential.”

And as Bowie himself said to Crowe, “I lie. It’s quite easy to do. Nothing matters except whatever it is I’m doing at the moment. I can’t keep track of everything I say. I don’t give a shit. I can’t even remember how much I believe and how much I don’t believe.”

Crowe’s last question is, “Do you believe and stand by everything you’ve said?” “Everything but the inflammatory remarks,” Bowie answers slyly.

There are also gems like, “… it’s very easy to be a mime. There wasn’t much competition,” and “The only art I’ll ever study is stuff that I can steal from.” Trust me, you want to read this. Just remember that you might have to go to rehab after. 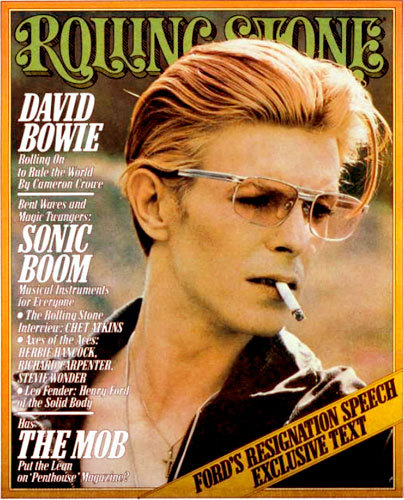 I like that the article, “David Bowie: Ground Control to Davy Jones,” goes on for pages before getting to this passage:

“Suddenly — always suddenly — David is on his feet and rushing to a nearby picture window. He thinks he’s seen a body fall from the sky. “I’ve got to do this,” he says, pulling a shade down on the window. A ballpoint-penned star has been crudely drawn on the inside. Below it is the word “Aum.” Bowie lights a black candle on his dresser and immediately blows it out to leave a thin trail of smoke floating upward. “Don’t let me scare the pants off you. It’s only protective. I’ve been getting a little trouble from … the neighbors.”

DAFUQ? Admittedly, hindsight is 20/20, but I feel I might have started the article with David Bowie HALLUCINATING A BODY FALLING FROM THE SKY rather than the experience of shopping for milk with Corinne “Coco” Schwab, Bowie’s secretary and maybe-something-more. On the other hand, I didn’t spend any time with rock stars in the mid-’70s. Drug-fueled delusions might have been so common that Crowe was bored: “Great, another guy thinking that bodies are falling from the sky. Let me talk to Coco.”

Oh, and after the falling body, we get this quote: “I think I might have been a bloody good Hitler. I’d be an excellent dictator. Very eccentric and quite mad.”

CLICK HERE TO READ THE 1976 ROLLING STONE STORY.
Coco Schwab also gets a mention in a 1976 People magazine story about Bowie’s starring role in the film The Man Who Fell to Earth. Bowie’s quotes in People are as fabulously contradictory as ever. Referring to his legal name, Jones, he says, “Jones has become a real shell. He’s given it all to Bowie.” But at the end of the story, he says, “Bowie was never meant to be. He’s like a Lego kit. … There is no definitive David Bowie.” Interesting!
CLICK HERE TO READ THE 1976 PEOPLE STORY.
More links:

Finally, one more quote from the Playboy interview:

“I’ve now decided that my death should be very precious. I really want to use it. I’d like my death to be as interesting as my life has been and will be.”

UPDATED TO ADD: My friend Julie lives very near Bowie’s Manhattan home. (She has spotted David’s wife Iman out and about, but never Bowie himself.) She went over to leave some flowers and sent me photos of the many tributes left outside the building. 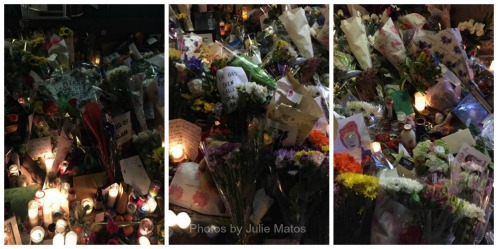 You might also like
The High Price of Oscar Jewelry
Musings on John Lennon's Birthday
With Age Comes Wisdom ... and IDGAF Style
Previous Post: « Memories of David Bowie
Next Post: Throwback Thursday: Jewelry Designs From 2006 »