Here’s a “What Wendy Wore” outfit for each month of 2015. (I’m not including any of the looks from my “Outfits on Repeat in 2015” post.) Click the photos for the original posts.

I felt great in the Zang Toi jacket and faux-garter tights that I wore to Zang’s runway show in February 2014, so I wore that combination again to see Cabaret this January. There are black Castelbajac shorts under there too. 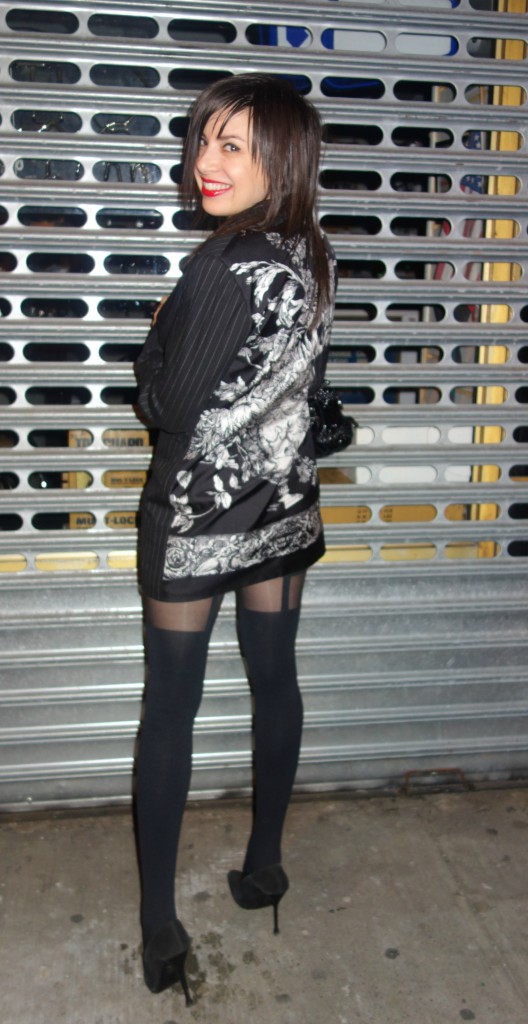 It was even better with blue lipstick though.

I love theme dressing, so I got out my Moschino heart dress for Valentine’s Day. I first wore this one in 2008.

When people see this dress on Valentine’s Day, they always say, “Awww!”

In March, I visited my parents in Florida and found some striped wedges while I was there. I mean, I went to a store with my mother and found them. I didn’t find them at my parents’ house.

The Florida humidity really did a number on my hair.

I was tempted to post another photo of the Zang Toi jacket and garter tights, because I wore that outfit again in April. But to keep things more interesting, here’s a Roland Mouret dress that I got in 2009.

I brought my vintage Moschino VIP dress to the big JCK jewelry trade show in Las Vegas at the end of May. I first wore this dress in 2011.

Hoped I’d be treated like a VIP. Didn’t work.

In June, Zang Toi dressed me from head to toe. Literally.

I love socks and heels.

We went back to Studio 54 — the venue for Cabaret — to see Jim Parsons (The Big Bang Theory) in An Act of God. That’s not to be confused with the play Hand to God. Two different plays.

I love that top so much that I’m a little scared to wear it.

I tried a new pose in August, while wearing my 2013 Castelbajac dress. 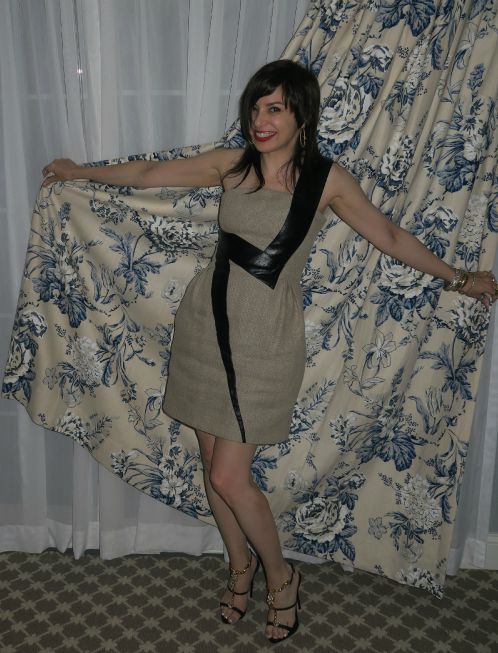 I think I was just trying to hide an ugly window situation.

This shedding feathered top was the bane of my wardrobe this year. I’m glad it made it to a Madonna concert in September. I threw it out recently. I hate not being able to keep things for years, but that top was evil. 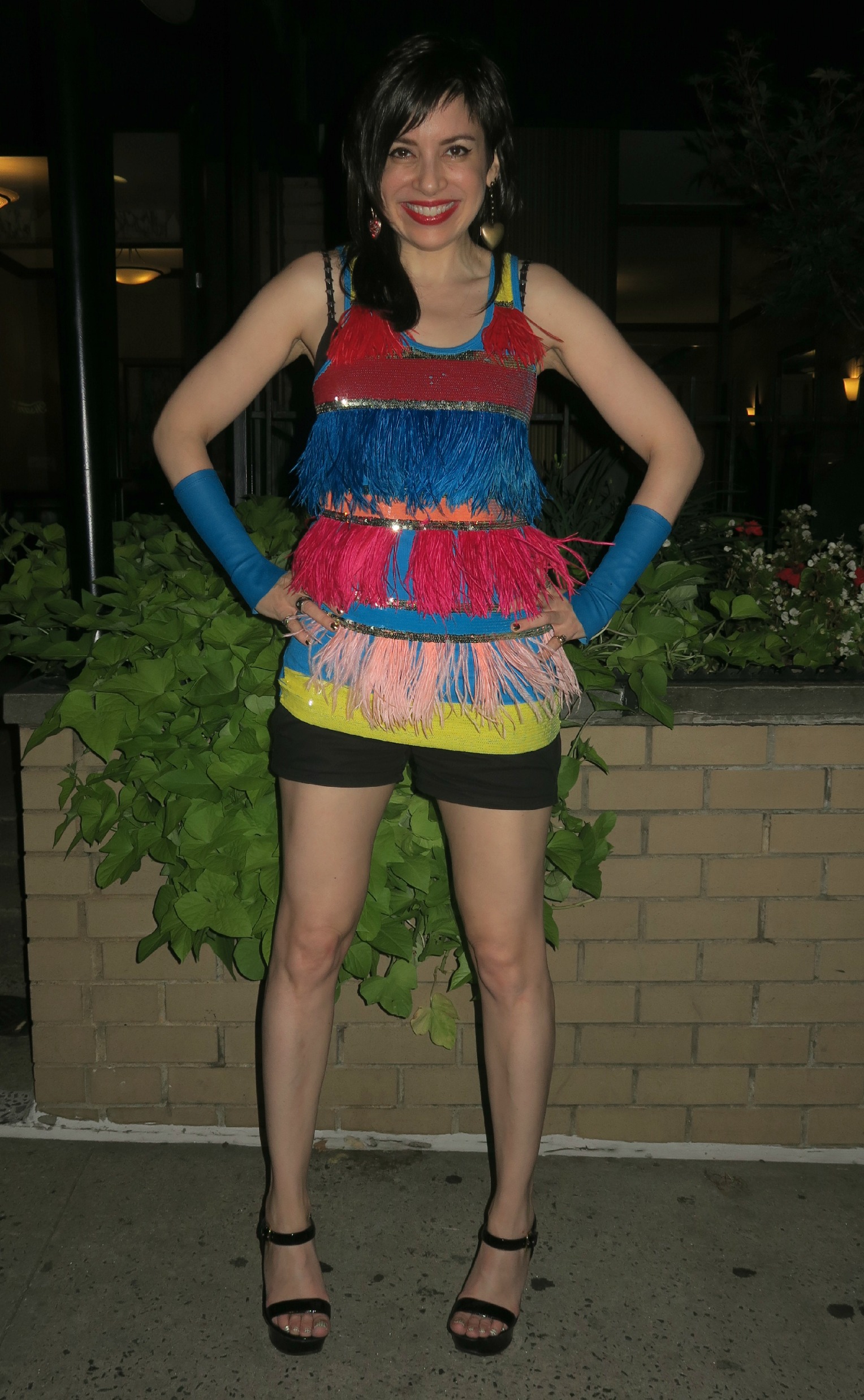 I got the wrist warmers in Paris this year.

My friend Julie Matos found this secondhand Catherine Malandrino dress for me this year. I wore it to an evening of jazz in October. 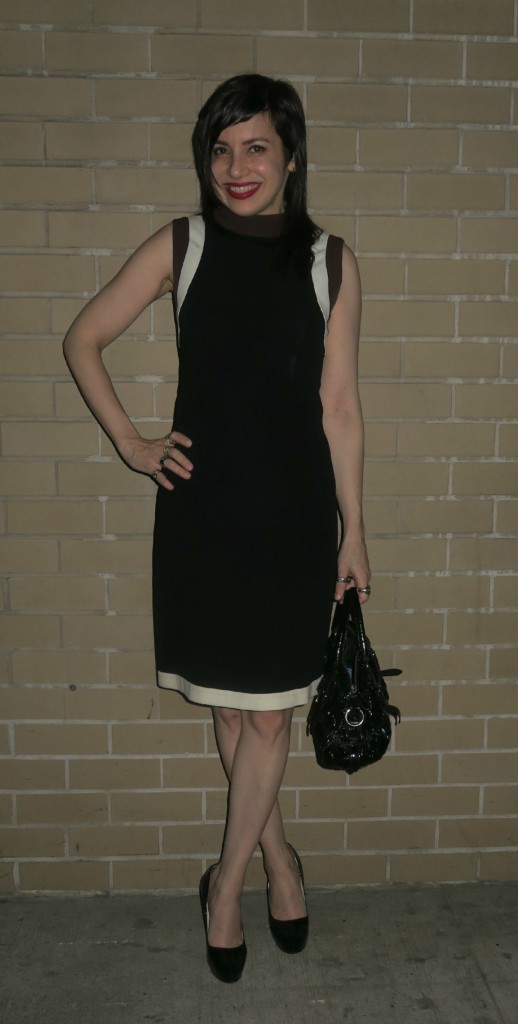 My friend Alyson Walsh had a book party in November. Her book is about style so I figured I better look sharp.  Razor-blade sharp! 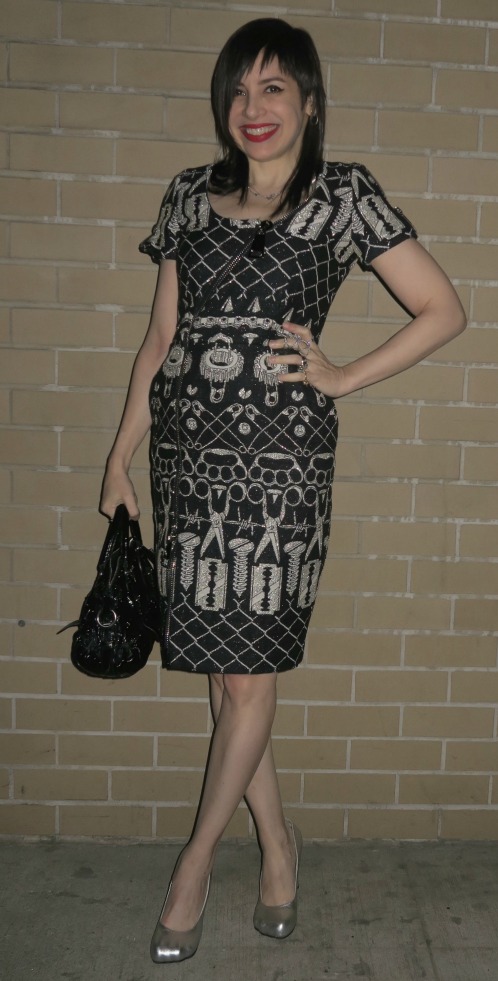 This Castelbajac dress looks better in person than it does in photographs.

My friend Julie also found this secondhand Gucci tuxedo dress on the same day that I got the Malandrino dress above. I wore this one to a holiday party and was so pleased with it that I put it on Instagram right away. The next night, I was going out with friends and couldn’t figure out what to wear, so I put this dress on again. On the way to dinner I thought, “I hope no one in this group checks my Instagram.” Naturally, I get there and someone says, “Oh, that’s the dress you had on Instagram last night!” 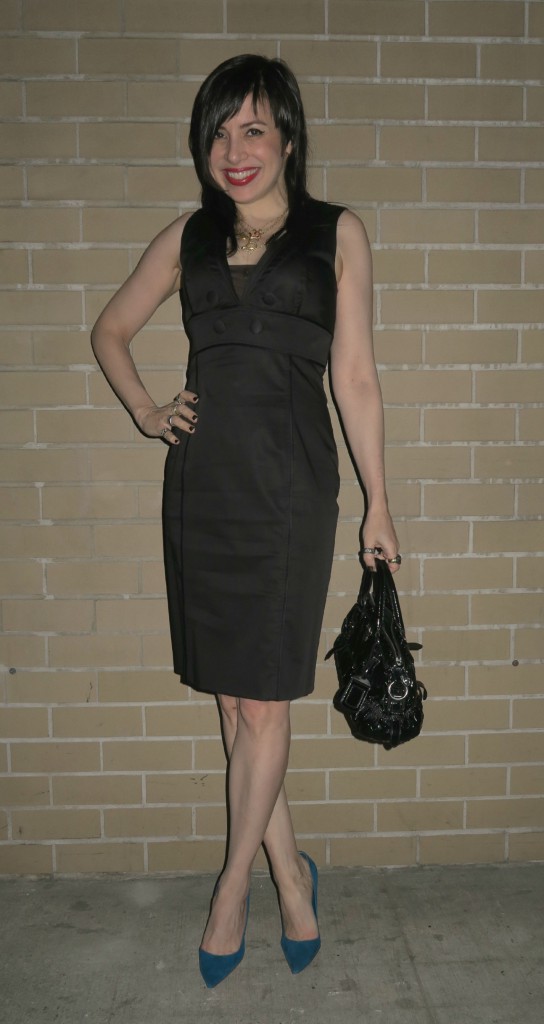 This is from the holiday party, not the dinner.

Looking back at these, I have to say that get a lot of use out of that black patent Prada bag that I bought in 2007. It must be down to pennies per wear at this point. I also seem to be passionate about shorts, which amuses me, because I refused to wear them for most of my adult life. Then I broke down and got two pairs on a 103-degree day in the summer of 2010. “Never Is the Next New Thing™” applies to me too!

You might also like
Bear-y Strange Fashion Memory and Related Thoughts
China at the Costume Institute, Zang Toi at NYFW
eBay Booty and Pauline Boty
Previous Post: « Year in Review: Jewels of the Month for 2015
Next Post: Year in Review: Concert Adventures in 2015 »