While visiting my parents in Florida last week, my gorgeous mother and I scoped out ultra-chic store Marissa Collections. I wanted to see if my jewelry designs would be a good fit for Marissa’s luxury jewelry department (yes!) but, of course, we couldn’t resist browsing the shoe department. I’d been keeping an eye out for a backup to a pair of black Prada wedges that I got in 2011 and have worn heavily, and there, in Marissa, was the same shoe. It was disguised by stripes and slightly tweaked straps, but it was still my shoe. I had to buy these. 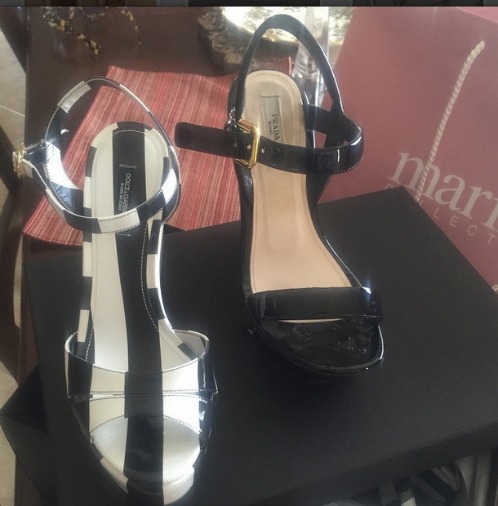 I’ve always liked a striped shoe and so, apparently, do a lot of other people. These shoes got compliments everywhere I went. Even my father was thrilled by the shoes. “Wear the striped shoes!” he said every time we went out. He also tried to get me to wear one striped wedge and one black wedge, but I didn’t think Florida was ready for deliberately mismatched shoes yet. Mix-and-match earrings, yes. Shoes, no.

I was wearing the new shoes when I found a scrap of red carpet to pose on outside a movie theater playing 50 Shades of Grey. This photo and “I Know You,” Skylar Grey’s song from the soundtrack, are the closest I’m getting to that movie. The sign behind me read, “Are you curious?” Um … not at all.

If you check those credits, you’ll see that those shoes are by Dolce & Gabbana. But I’m not going to burn them (too expensive) or return them (too worn) despite the strange and stupid interview Domenico Dolce and Stefano Gabbana did with Italy’s Panorama magazine. In case you missed it, they spoke out against gay adoption and complained that in-vitro fertilization produces “synthetic” children. This isn’t the first time that the designers — gay men who were romantic partners for many years — have said something self-hating: In 2013, Dolce laughed off the idea of gay marriage. I’ve always felt a little sorry for the duo for having internalized such anti-gay sentiment, though I’ve also wondered if they just like to say these things to be provocative. If it’s the latter, they’ve certainly achieved their goal by provoking feud-loving Elton John. Elton doesn’t play when it comes to his kids — who were conceived through IVF — and went off on Instagram, calling for a boycott of Dolce & Gabbana, while simultaneously giving the label what must surely be the most attention it has ever had. I’m dying to know if sales will go up or down. Maybe the brand will now be embraced by hordes of anti-gay-marriage customers … though that might be a little awkward what with Dolce and Gabbana being gay and all. Hmmm. These guys sure did paint themselves into a corner here. And who is even upset about IVF in 2015? The first “test-tube baby,” Louise Brown, is turning 37 this year! Get over it!

I don’t buy Dolce & Gabbana products in enough quantity to make a grand statement of personal boycott very meaningful, and I’m not giving up any of my old pieces unless Elton John reimburses me for them. Fortunately, I don’t have any items emblazoned with Dolce & Gabbana’s name that will need to go to a thrift shop lest I look like the guys’ No. 1 apologist. At the same time, I doubt I’ll be drifting toward the Dolce & Gabbana department in any high-end stores anytime soon. Fashion is supposed to make you feel fabulous, and thinking, “They’re the ones that said that dumb thing,” as you browse is not a fab feeling. Who can say how long such a distaste might last? I do believe John Galliano has changed his life since disgracing himself in 2011 and that he deserves his new chance at Margiela. On the other hand, I’ve never gotten over Elton’s own 2012 rant about Madonna, in which he said she looked like a “fucking fairground stripper,” and that “Her tour is a disaster and it couldn’t happen to a bigger cunt.” (Her tour was the top-grossing tour that year.) Oh Elton, you know all about being a bitch with a big mouth.

Maybe that’s why I imagine that, eventually, Dolce and Gabbana will look at the world through kinder and more accepting eyes; everyone will kiss and make up over a family meal with Elton, his husband and kids; and this story will be added to some website’s slideshow of “Elton John’s Top 10 Feuds.”