My six-year term as chairman of the Columbia Daily Spectator‘s board of alumni trustees came to a merry end on January 30. That’s when the news organization for Columbia University’s undergraduates held its annual fundraising dinner, which this year featured guest speakers Ben Smith, editor-in-chief of BuzzFeed, and Beau Willimon, showrunner/writer of House of Cards. At a board meeting before the dinner at the New York Athletic Club, I passed the baton to Stuart Karle, the new chair, and Beth Knobel, the new vice chair. 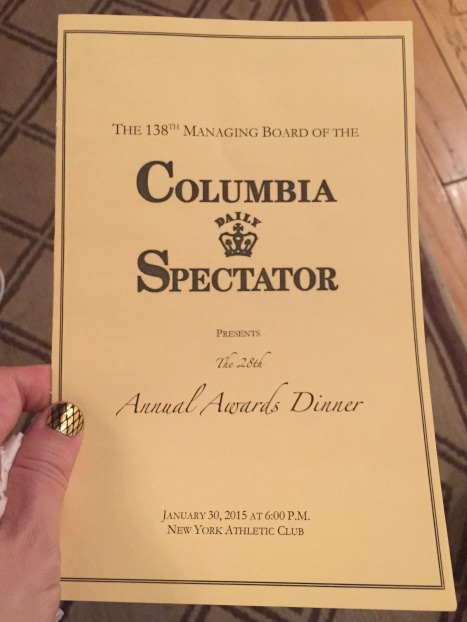 I’m staying on the board, which I joined in 2002. I became chairman in 2008, succeeding television-news executive Dick Wald, who had served as chair for 40 years. As I’ve said before, I had no interest in challenging Dick’s longevity in the role, which is why one of the first things I did as his successor was call for a trustee vote on term limits for the chair. But that wasn’t just because I didn’t want to be booked through 2048. An organization benefits from fresh perspectives. Stuart is general counsel for North Base Media. Before that he was the chief operating officer of Reuters and general counsel for the Wall Street Journal. Beth is a professor of communication and media studies at Fordham University. Before joining Fordham, she spent more than 20 years as a journalist, including seven years as Moscow bureau chief for CBS News.  Their experiences are much different from mine, so I’m excited to see what they will do. 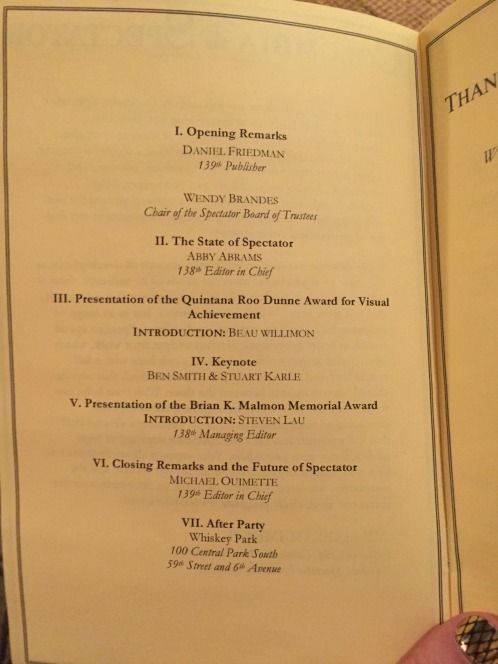 I had some wild times during my term as chairman, starting with the financial crash of 2008 and ending with the Spec’s decision, last spring, to become the first Ivy League news organization to drop daily print publication in favor of a mostly online model. (Oh, the uproar over the latter provided quite a number of amusing moments.) In between, we funded and completed the massive task of digitizing Spec’s archives going back to 1877; revamped the fundraising dinner so that it raised funds instead of losing them; and diversified the board of trustees. It can be a challenge to do things differently at a venerable organization and resistance to change often involved the word “tradition.” I decided to say a few words about tradition in the short speech I gave at the beginning of the dinner.

I’m going to share my prepared text here, because the issue of tradition — when to treasure it, when to let it go — comes up often in life, outside of college news organizations and Fiddler on the Roof. If you read nothing else, read the last two paragraphs for a good laugh:

“Before I go, I’d like to say something about tradition. During my tenure, Spec alumni and current staffers have frequently shared their fond memories of Spec’s traditions with me. What I’ve learned from that is that you don’t all have the same memories of the same traditions. In fact, I’ve identified just two real traditions: one is Spec’s core mission as [previous speaker Daniel Friedman] described it. The other is constant change.

Constant change is the nature of the beast at Spec. Every year, an entire student managing board graduates and a new one takes over. As a result,  it takes about four years for many ‘traditions’ to morph or even disappear entirely. Of course, there HAVE been some traditions that have lasted for decades – the most important one is our 50 years of financial independence from the university. But a lot of other traditions are more superficial, for instance the old name of this dinner. And when it comes to the less significant traditions, not everyone knows why they exist or even that they exist at all.

Anyway, the normal amount of change at Spec greatly accelerated during my time as chair due to larger social movements and economic transformations born from technology. When I succeeded Dick during the financial crash in 2008 – he picked a good time to install a successor – we didn’t have Instagram. YouTube was only three years old. Twitter was two. Facebook as we know it was two years old – before 2006, you had to be invited to join it. BuzzFeed was two, and it’s now one of the largest news sites in the world. Netflix had just started streaming video in 2007 and didn’t announce plans for its first two original series until 2011 – one of which was House of Cards, premiering in 2013.. The first iPad was a couple of years away — and when it came out everyone thought the name iPad was hilarious. So, for sure, in 2008, no one was binge-watching an entire season of House of Cards on his or her iPad … which you can now do to ease the the discomfort of being squeezed into a coach seat on an airplane.

But the changes in our habits have gone beyond streaming compelling television series and enjoying lists of 24 cats that really love sinks.. Now, If you have a cellphone, you don’t need a print newspaper or a television to find out what’s going on in the world. You don’t even need the so-called old-media at all as newer companies like BuzzFeed — which did feature a photo of my cat in a sink — branch into serious, long-form journalism. That said, I still love print. It’s what I grew up with, it’s my tradition. Every day I read the New York Times and Wall Street Journal in print. For the class of 2018, newsprint might as well be the 8-track tapes of my generation. They’ve heard of it, they’ve even seen it, but they’re not interested in using it. That’s why I’m so proud that, last spring, Spectator became the first Ivy League news organization to cast off the traditional daily print format and go where its readers are. Online. On their phones. It was a controversial move, and painful for a lot of people, but it has been so beneficial to Spec — as Daniel has already indicated — that I predict, in a very short amount of time, people will wonder what all the fuss was about. I also predict that this is one of those changes that will stick because it addresses Spectator’s mission of serving the student body … not nostalgia or habit or tradition.

On a personal note, there’s another change I’m proud of. I’m the first woman to chair the board of trustees. Because of that, I was inspired to look up the story Spectator ran when Eleanor Prescott became the first woman to join the student managing board. The story ran in the March 17, 1967, edition of Spec – now available online thanks to the recent digitization of our archives. The headline was: Appointment of Girl to Spectator Board Shatters Tradition.

I’d say some traditions are better off broken.”

Beau presented the Quintana Roo Dunne Award for Visual Achievement, which went to Steven Lau, Spec’s first video editor as well as its managing editor. I met Beau last March at a PEN talk about his work. When we chatted, I found out that he’d graduated from Columbia 10 years after I did and that he had some hilarious stories about his involvement with Spec. I told him that I was going to ask him to tell those stories again, in public, in about 10 months. I figured that he’d probably be busy with glamorous Hollywood things when the time came, but when I sent my “Hey, remember me?” email about a month before the dinner he said he’d be there. That night, he came straight from the House of Cards writers’ room. Here is my poor-quality video of his funny Spec stories, including what he learned about SWAT teams.

Beau was great fun to hang out with, especially because he told me all about the next season of House of Cards. I kid! I kid! He was like a vault. 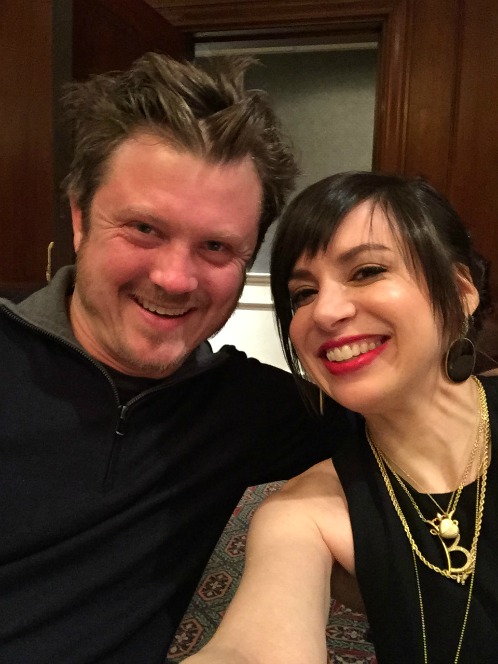 Instead of Ben Smith giving a standard keynote speech, Stuart interviewed him about BuzzFeed. 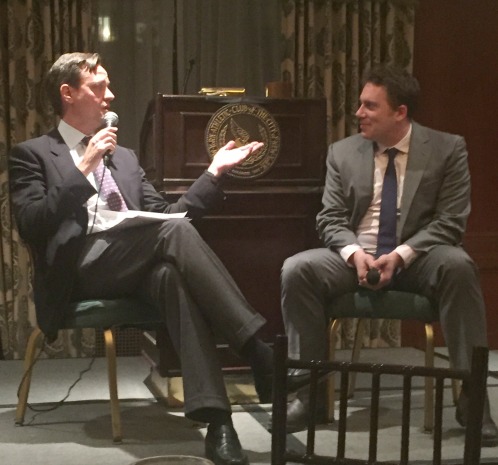 Stuart on the left, Ben on the right.

Ben made some good points about the skepticism directed at BuzzFeed’s move into longform journalism. Some people seem to find it difficult to imagine that a site known for lists about extremely disappointed animals can also produce more serious content, but, Ben pointed out, many daily newspapers historically have had a range of content, with comic strips, kids’ pages, horoscopes and recipes delivered along with the latest international headlines. Likewise, television news programs that cover politics and the economy also air entertainment updates and sports coverage. Just because the web covers the cute animal beat more thoroughly than newspapers or TV have doesn’t make the online mix of high and low that unusual.

At the end of the dinner, student publisher-turned-editor-in-chief Michael Ouimette thanked me for my work on behalf of Spec — singling out my habit of answering his emails at 4 a.m. — and presented me with a framed certificate thanking me for my service to Spectator. 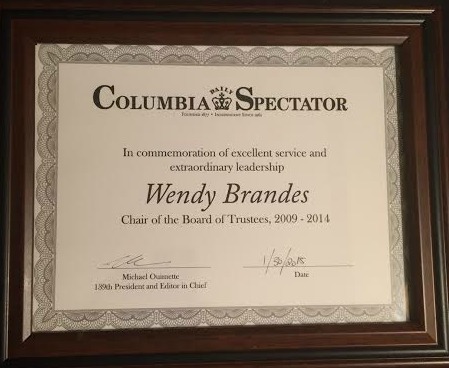 When we all went for drinks after the dinner, the students offered to take my certificate back to their office for safekeeping. I was like, no way, I’m carrying this everywhere from now on!

I promised Stuart I’d still help out with the annual dinner, and I’ve already started working on next year’s. I feel so organized!

You might also like
What Wendy Wore: Alleviating Non-Buyer's Remorse
A Basic Wardrobe, Postscript
In the News/On the Blogs
Previous Post: « Wendy Brandes Jewelry on ScarJo in W Magazine
Next Post: Twisting and Turning Jewelry »