When I was hanging out with my designing friend Zang Toi on July 4th, I showed him some old pictures of us together. One of the photos was in this post from 2008 and, as I looked at it, I decided another picture in the same post captured one of my favorite fashion moments evah. 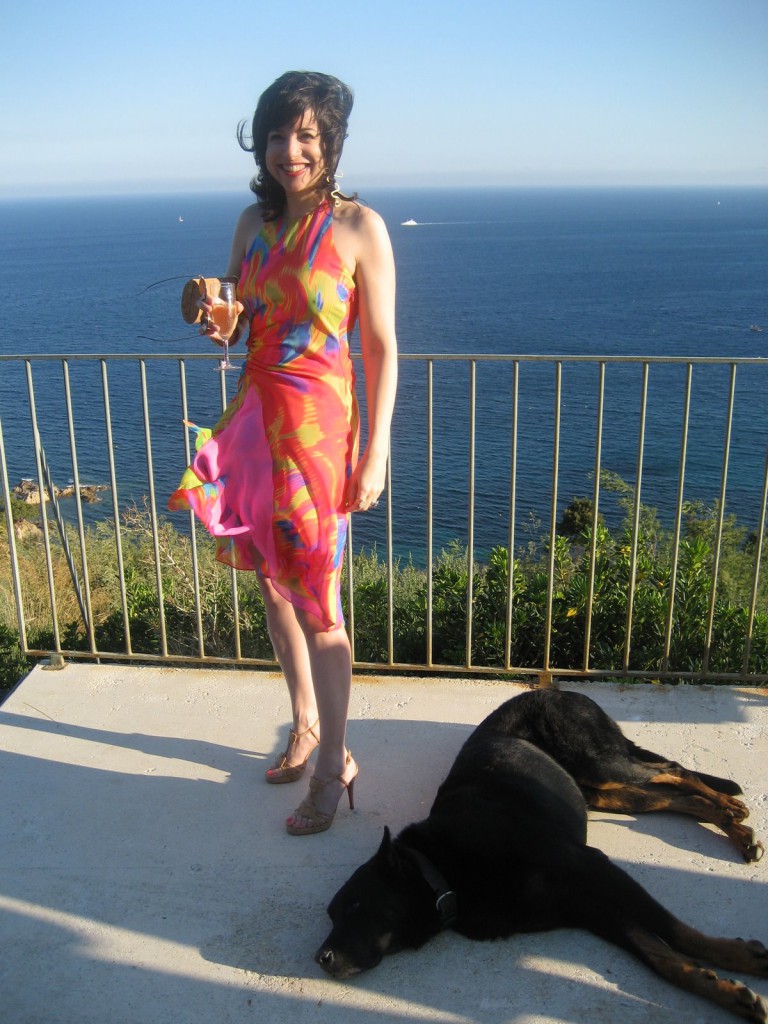 In the picture, I’m wearing one of my most-loved Versace dresses — you know I’m a major fan of neon colors. I like how it’s fluttering in the breeze, but the image is still sharp.  You can’t beat the beautiful background, which is St. Tropez, where I was attending a wedding. (Zang designed the bride’s gown.) But the best part, for me, is the giant dog sleeping at my feet and what he did after the photo was taken. I didn’t know this dog at all. He was just hanging out with the guests, and we were never formally introduced. But, after he woke up from his nap, he strolled over to me and calmly ate the cocktail napkin I was holding. He was friendly about it, but determined. I’m generally against dogs eating cocktail napkins, but considering this dog’s size, I decided I wouldn’t argue with him.

I brought the same dress on vacation this month. I asked my designing friend Stacy Lomman how to transport a chiffon dress without carrying it in the cabin on a hanger like I did for St. Tropez. She advised me to roll it up like a “burrito.” I did, and put it in my carry-on bag and was very pleased with the results. I wore it twice in Greece: in Athens … 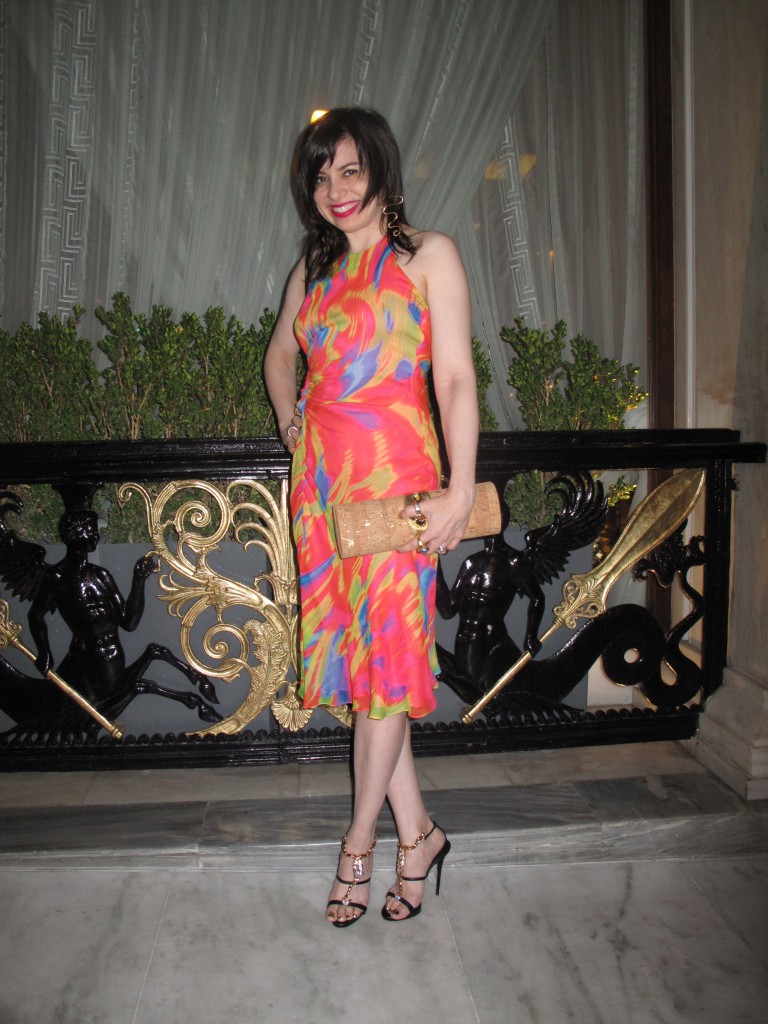 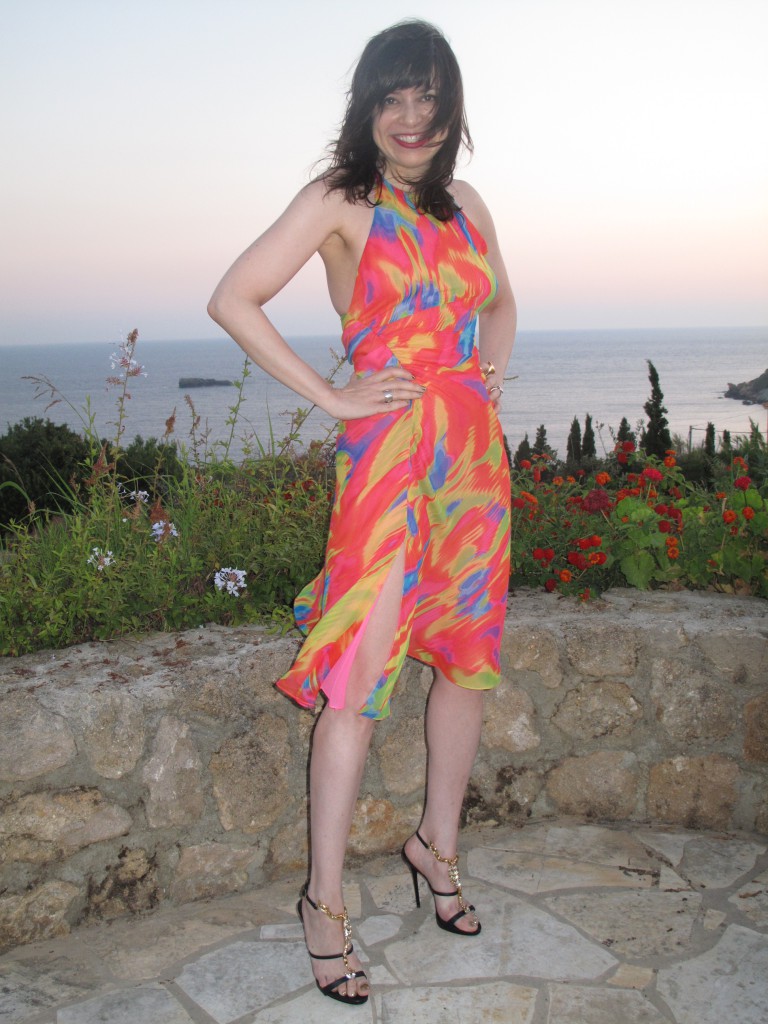 What Wendy Wore
Dress: Versace (I suspect this is from Spring 2003, which had a lot of neon.)
Shoes: Guiseppe Zanotti (2014)
Purse: Diane von Furstenberg (Possibly from 2008)
Jewelry: My own designs

A Jack Russell puppy friend, Irma, found the hem of the dress very compelling. She kept trying to catch it in her teeth. 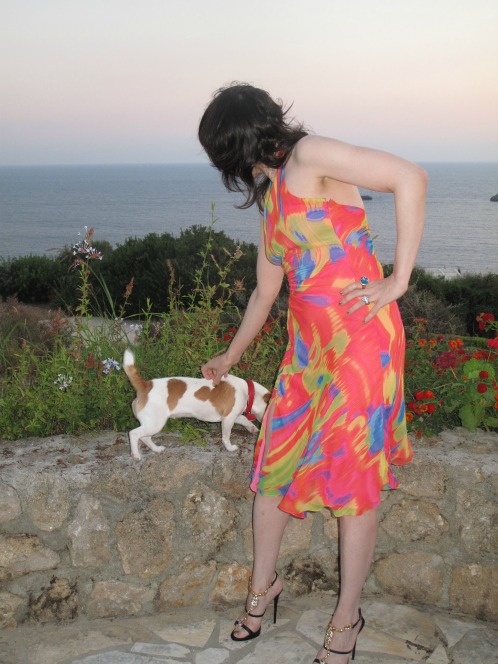 She wasn’t that interested in taking a proper photo, but I got a good grip on her and made it happen. 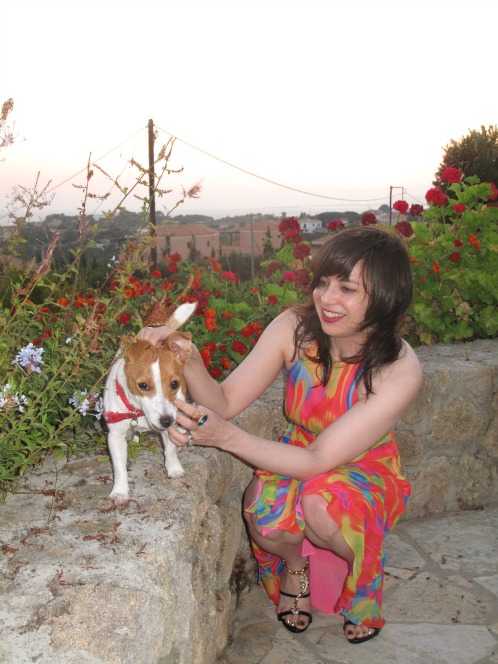 Apparently, this dress has a certain animal magnetism. That’s definitely a plus!

You might also like
Going Wide With Frame Jeans and Diane Keaton
The Weeks in Review
Throwback Thursday: Maternal Great-Grandparents
Previous Post: « The Week in Review, Plus the Chicken Necklace Pre-Order
Next Post: The Big 13 »