I enjoy redesigning my customers’ old, unloved jewelry. I’ve even redesigned earlier redesigns. For instance, I made a ring for my gorgeous sister, Terri Berry, in 2011. The stones originally came from my mother’s ruby-and-diamond cocktail ring. Before I was in the jewelry business, I took the cocktail ring to a local jeweler, who did something … well, it’s hard to describe, except it certainly wasn’t what I’d asked for. I even brought in an example that he completely disregarded. Years later, when I was regularly working with great people, Terri realized she never wore the old pieces and gave them to me for a redo. 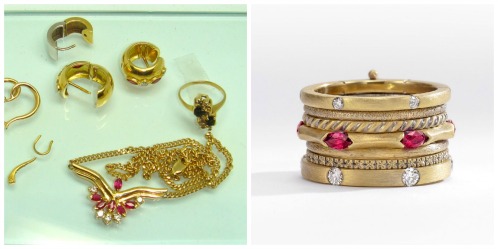 My latest redesign of a redesign was for my gorgeous client Susan. (One of my Susans. I have a few!) Last year, she went to a local jeweler for the first redesign. She requested earrings incorporating pearls from earrings given to her by a friend in 1985; the diamonds from studs she bought during her first trip to Paris in 2005; and her birthstone, amethyst. (Amethyst is February’s birthstone, so happy birthday to Susan!) Unfortunately, she wasn’t pleased with the results. After she sent the earrings to me, I understood why. 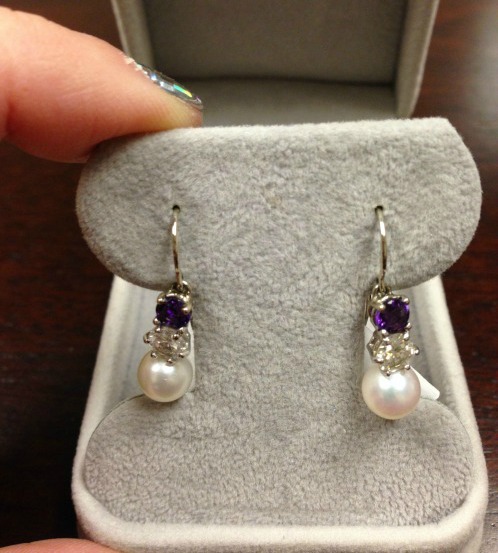 There’s nothing terribly wrong with these earrings, but there’s nothing special either. They’re quite generic, which was not Susan’s goal when she decided to use gems with such special meaning to her. Also, Susan has purchased much edgier jewelry from me, so something as conservative as this doesn’t match her aesthetic.

Susan told me to do whatever I wanted with her new design, and what I wanted to do was the opposite of what she already had: luxurious instead of plain; yellow gold instead of white; lots of metal instead of barely visible metal; asymmetrical instead of matching; and a button earring instead of a dangling style. Despite using more metal, I was determined to keep the earrings very lightweight. Susan had already ended up with one pair of earrings she didn’t want to wear. I didn’t want to disappoint her again with earrings that were too heavy for her.

The photo below was taken after the the basic earring shape was made, using extremely thin 18K yellow gold. I had also already given the gold an interesting texture, but I’d yet to decide if I wanted to set the faceted stones right side up or upside down. I placed the stones in the settings — but didn’t actually set them — so I could consider my options. As you can see, one earring has the amethyst and diamond up, and the other has them down. 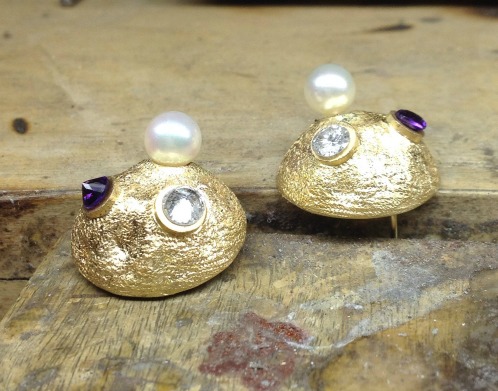 Earrings on the jeweler’s bench.

I ultimately decided to put the diamonds upside down and the amethysts right side up in both earrings. After that, all that was needed was the earring posts, and that’s when things got unexpectedly complicated. First, the jeweler placed the posts right in the center of the earrings, which meant the earrings could turn around in the lobe and potentially lose the effect of the asymmetric gem placements. “Put the posts a little off-center,” I said, only to wind up with posts on the very edge of the earrings.  When I tried them on, they drooped forward. “Try it a LITTLE off-center,” I said. On the third try, the posts were perfectly placed … 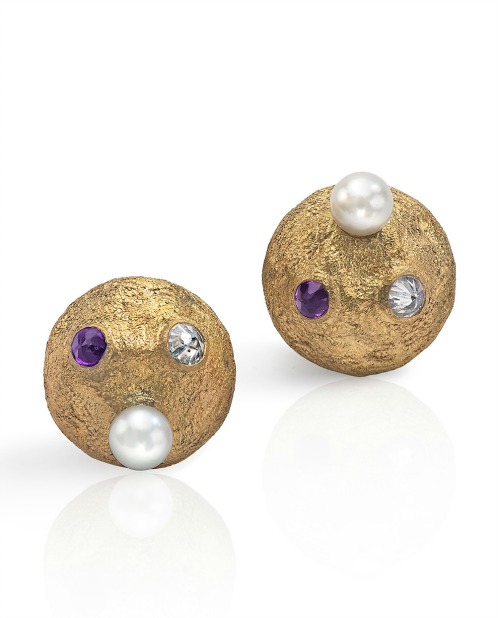 The earrings, after the posts were placed.

… but the earrings still drooped when I tried them on. Mea culpa! All ear lobes are different, so these earrings might have been better positioned on Susan’s ears, but Susan and her lobes are not based in New York, so I couldn’t try them on her. I considered sending her plastic disc earring backs that help prevent earring droop, but again, I wouldn’t know if that would work for Susan until I sent the earrings to her. I hated the thought of Susan receiving anything she couldn’t wear instantly. Then I considered omega backs, which are like the clips on clip-on earrings, except the post for pierced ears is still there. Those always do the trick. But omega backs might need to be loosened or tightened for comfort. That brought me back to the possibility of Susan being unable to wear the earrings right away. I finally realized I didn’t have to be so committed to button-earring idea. Susan had been interested in dangling earrings when she did her first redesign, and these new earrings were already so different from the originals that there was no confusing them just because they dangled. Voilà (or “walla” as some people say online)! Here is my Jewel of the Month. 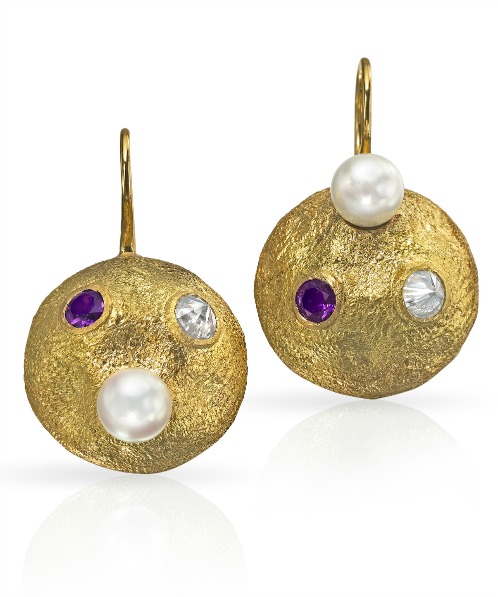 I rarely change a piece so much after it’s finished, but the challenge of custom work is that I’m starting a design from scratch, on a deadline, and with a set budget. I don’t have the time or funds to do the kind of silver sample I sometimes make for my own line. I don’t always know how a brand-new design is going to wear until it’s finished. At least I learned something from this experience, which is to plan for an omega back on button earrings, as long as the customer agrees in advance that she won’t mind sending them back to me for adjustments. I like handling any adjustments, polishing, and repairs to my designs personally, rather than having the customer go to someone who might not understand the piece. For instance, another jeweler once gave my customer’s matte, satin-finish ring a shiny, high-polish finish.  My customer was so bummed and a little hesitant to tell me, because she was worried she’d ruined her ring. When she did show me, I snatched that ring off her finger and re-polished it the right way. An easy fix! I’ve done much more complicated operations on purchased jewelry. 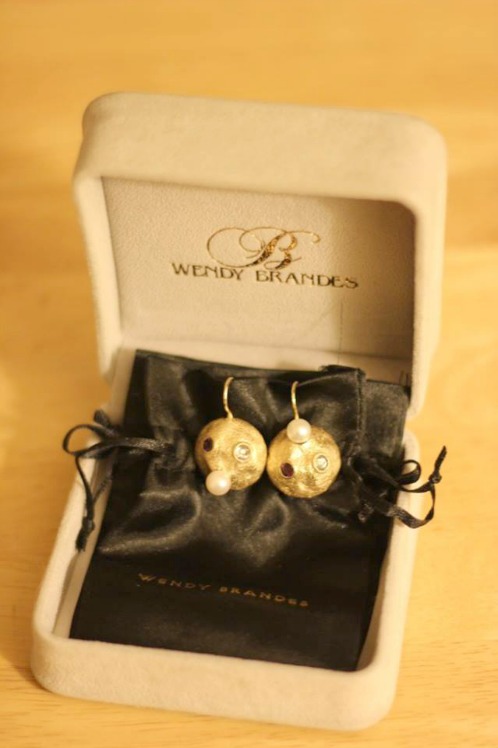 Susan took this photo of the earrings.

Something for customers to take away from this particular redesign is that if you don’t have a jeweler you work with frequently on custom designs — someone who truly knows what you like — it’s best to work with someone like me who does have close relationships with jewelers. Not every bench jeweler is willing to make so many changes to a finished piece. Time is money! The more changes are made, the more time is being used, and people generally like to be paid for their time. If they’re not going to be paid, they might just want to get rid of you before you eat up their profit. But I’ve worked with my two favorite jewelers for eight years. They know that I’m not going to stop working on a design until I think a piece is perfect and, because I do so much business with them, they don’t always charge for extra work. That’s helpful to me, because once I give a customer a budget, I stick to it. If there are extra costs, I absorb them. 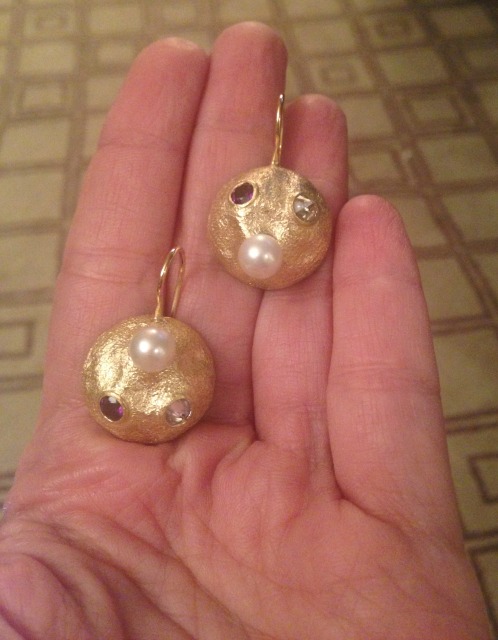 The earrings in my hand, to show the size.

You can glimpse one of the earrings on Susan in this iPhone photo. 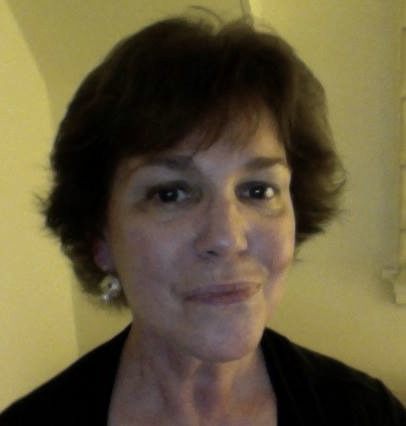 It’s always nice to get an email from a customer that says, “I ADORE them.” Also, Susan reported, “They’re light as feathers.” Mission accomplished!

You might also like
Year in Review: Jewels of the Month for 2014
Need Some Hugs and Kisses?
Jewel of the Month: Mid-Finger Ring Monogram Mania
Previous Post: « Valentine’s Day Sale, Plus Romantic Jewelry Under $100
Next Post: Rose-Gold Valentine’s Day Locket on Sale and in Action »