Because cat things are always funny, I have to share a letter sent to The Ethicist column of the New York Times Magazine last month. W.S. of New York wrote in to say:

“One of my neighbors complained to my co-op board’s management firm, claiming I allow my cat to exercise unsupervised in the hallway — a blatant lie. Without hearing my side, the board declared that no cats could be in the hallway, supervised or not. Is it ethical for me to never again speak to the person who lied about my cat?”

“First of all, I love the concept of a cat ‘exercising unsupervised,’ even if it never actually happened. Second, I don’t see the ethical conflict in your quandary. A normal person talks to his neighbors (particularly if a neighbor initiates the conversation), but it’s not a moral obligation unless the neighbor is in some kind of immediate danger. If your despised neighbor stops you in the hallway and desperately says, ‘I need your help,’ you can’t walk away on account of your cat’s unjust persecution. But most of the time, day-to-day conversations aren’t that intense; most of the time, you can freeze out whomever you like, for whatever reason you see fit. Friendliness is a virtue, but not a moral requirement. This behavior, however, will have its own set of discomfiting consequences. ‘I don’t know about that guy in 6-C,’ your neighbors may gossip as you wordlessly skulk about the building. ‘He seems like an oversensitive recluse. Also, I heard that his cat has really gained weight.'”

I’d write more, but FitzRoy and I are going to do our yoga now. A kitteh has to stay limber! 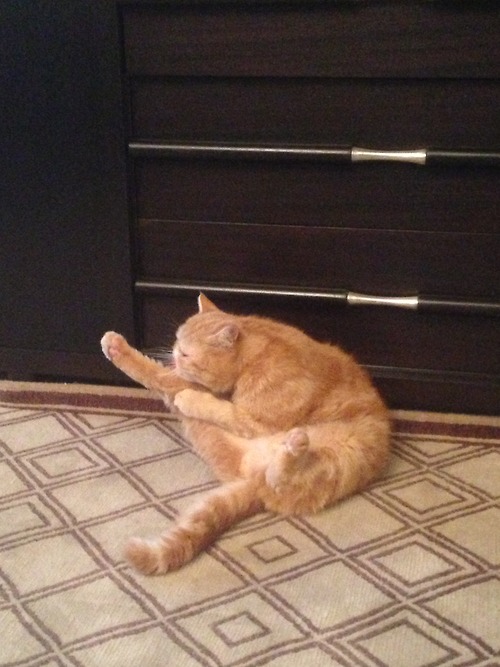 You might also like
When Fashion Goes Right
Throwback Thursday: Stalking the Opurra Star
Introducing Edward
Previous Post: « What Wendy Wore: Laura Mvula at Le Poisson Rouge
Next Post: Musings on Former Greatness and the Week in Review »