I came across this description of social-media attitudes on MetaFilter recently, and I thought it was high!larious!

“OTHER PEOPLE ARE NOT ALLOWED TO ENJOY THINGS THAT I DO NOT ENJOY.”

That line sums up a vast number of conversations on Twitter. I’m always amazed that people have the time and energy to aggressively tell strangers the equivalent of: “That shit that makes you really happy? I don’t like it. STOP BEING HAPPY!” My personal feeling is that as long as you’re not committing real-life murder and mayhem, why do I care what your interests are? Watch your movies, listen to your music, read your books, play your video games, wear your bandage dresses — IDGAF! Maybe you’ll enjoy yourself so much that you won’t need to be in my business, telling me that my pleasures aren’t okay with you. I promise you that kind of conversation is not going to change my enjoyment of anything except your company.

I don’t mind the opposite situation: If you want to try to convince me I should like something that I don’t, I’ll lend an ear to that. I figure it’s good to be open to finding the positive in unexpected places. Feel free to tell me about pop culture that I might want to check out. But when it comes to denigrating my interests, I have to misquote Jack Nicholson in As Good as It Gets: “Sell negativity someplace else, we’re all stocked up here.”

Oddly, one kind of criticism that doesn’t bother me as much as people seem to hope it will is anything directed at my jewelry designs from an aesthetic perspective. I’ve had people tell me they don’t like skulls, snakes or my style overall. When they say it to me in person, they look at me with great anticipation, awaiting my reaction. I feel like they’re disappointed when I laugh and say, “Fine, go to Zales for your jewelry. Or go to Jared or Walmart or Tiffany or Cartier!” There’s so much jewelry in the world! There’s something for every customer, and the majority of it isn’t sold by me. I can’t be upset by that. I also can’t be upset by people saying my work is ugly when I’m looking back at them thinking that their jewelry is hideous! The only difference is that I will keep my opinion to myself. That goes back to what I was saying up above. If I don’t have something nice to say, I say nothing, because if they’re happy with their awful jewelry (or fashion or hair or makeup or whatever), I’m happy for them! I don’t think it’s my role in life to offer “constructive criticism” to everyone I see. 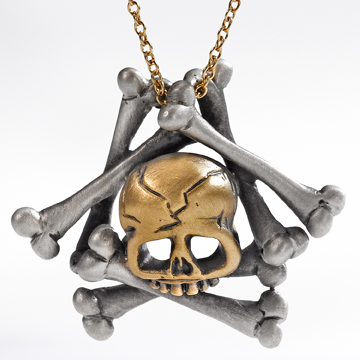 I always wish retailers that reject my line would be as blunt as the folks trying to get a rise out of me. It would be okay if they told me, “We just don’t like it.” That’s so much better than saying something untrue, like that my work is “too mainstream.” My jewelry isn’t mainstream — #factsonly, as Jay Z would say — and saying otherwise makes me feel like bitches are gaslighting me. But, as a writer friend recently pointed out to me, people in business who are afraid to form their own opinions or to verbalize the ones they have will instead offer specious reasons to justify their decisions. I’ve got to live with it.

All of this reminds me that, during Sunday night’s MTV Video Music Awards, I enjoyed something that practically no one else — one exception being Michael Musto — enjoyed. 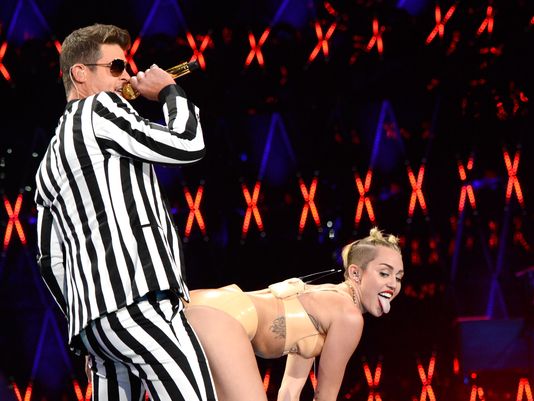 Miley gets down to business with Robin Thicke.

Folks have complained that she was out of line because the VMAs are a “family show”! DAFUQ? The VMAs are for getting crazy, acting out and offending the squares — especially all the concerned mommies and daddies! What’s up with this collective amnesia where everyone forgets the outrages of previous years? Madonna’s 1984’s “Like a Virgin” performance — now considered classic — had everyone predicting the corruption of young girls, the end of the world and who knows what else. There was the same response to Britney Spears’s skin-toned, belly-baring, thong-flaunting outfit in 2000. I attended that show and let me tell you, the entire audience gasped when she ripped off a suit to expose this: 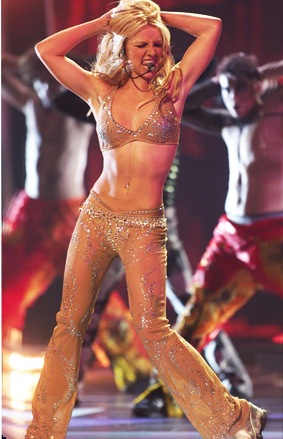 Was I stunned? Yes. Was I initially horrified? Yeah. Did I wind up loving it? Yeah! Am I glad I saw it with my own eyes? Hell, yeah! Every generation needs its over-the-top naughty girl, courting attention and controversy at every opportunity, and Miley is playing that role now. We need silly scandalous behavior to take our minds off the unbearably serious stuff in life once in a while (anyone following the news about Syria?), so go on with your bad self, Miley! Also the people who complained that she was rubbing all over Robin Thicke? Who cares? That boy can take it. He’s rubbed all over nearly-naked girls, and turnabout is fair play. The guy who said, “We tried to do everything that was taboo” can put up with some close contact with a gal who was actually more covered up than the models in the uncensored version of his video. The only thing he has to be upset about is that she totally dominated him on stage. You win some, you lose some, Robin Thicke!

Hate Miley all you want, call her ignorant and inauthentic. I’m not going to fight you; I’m just going to keep being entertained by her antics. And ten years on, when everyone’s upset by the next girl who gyrates  in her underwear, I’ll be here to say, “Remember when we were that bothered by Miley and then our lives went on like usual?”

UPDATED TO ADD: Since the VMAs, people have been sending around a photo of Will Smith’s family supposedly reacting in horror to Miley Cyrus. I noticed early on that the audience still was from Lady Gaga’s set instead, but reality never stopped anyone from sharing a better story. What’s really interesting in this Huffington Post item on the Smiths is the animated GIF, which tells a much different story than the still photo. Check it out!

You might also like
Angelina Jolie and Brad Pitt Forgot to Call Me
More Rolled-Up Jeans
Madonna Is Queen
Previous Post: « Fashion Repeats Itself: Black & White Camo, Backwards Heels
Next Post: Hey, Texans! Check Me Out at Jewel Gallery in El Paso! »