A week ago today, I was enjoying my annual Pimm’s Fest with my gorgeous London blogger friends. The fest started in 2008, when I met up with Sharon of Thrift My Style and the lovely lady behind the since-abandoned Times of Glory blog to shop Trudie Styler’s castoffs (why didn’t I buy more?! I’ve got non-buyer’s remorse!). We toasted our bargain-hunting success with Pimm’s at the Harvey Nichols cafe. Since then, we’ve skipped the shopping and gone directly to the Pimm’s with varying groups meeting at varying locations.

The 2013 Pimm’s Fest took place at London’s Balthazar in Covent Garden. I usually have my New Year’s party at New York’s Balthazar and the entrance of London’s spot is so similar to New York’s that I felt all befuddled before I even drank anything. That didn’t stop me (and the other wimmins) from drinking plenty. Look at all the empty glasses in the photo MrB took! From left, we have Mrs. “That’s Not My Age”; Liz of Vintage-a-Peel; me; Sharon, who borrowed some of my rings for the afternoon, which is part of the annual tradition; and Kate of Make Do Style. 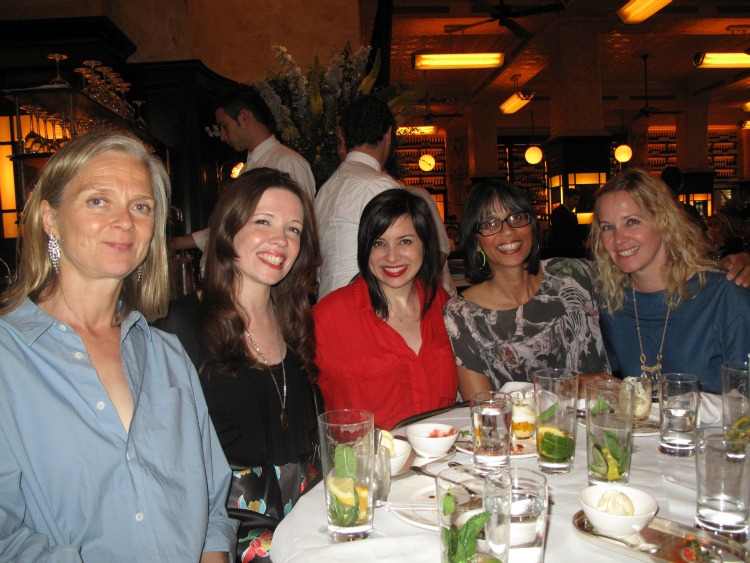 We reserved the table for 3:30 p.m. and had so much fun that when I next checked the time, it was 7:15 p.m. and MrB and I had theater tickets for 7:30. We said hasty goodbyes and had to speed walk from Covent Garden to Leicester Square, where we only missed the opening song of The Book of Mormon. The musical satire opened in 2011 on Broadway and we hadn’t yet seen it so I was obsessed with catching it in London, where it opened this February. (It was highlarious!) If we see one Broadway performance a year, that’s a lot, but we go crazy when we’re on vacation in London, so, in addition to The Book of Mormon, we took in Top Hat; One Man, Two Guvnors; and The Cripple of Inishmaan, which starred Daniel Radcliffe of Harry Potter movie fame. I swear, when you live in New York City, Broadway doesn’t seem glamorous at all. It’s so hectic, so close to work, so full of tourists! But when I’m a tourist in London, the West End is where you’ll find me.

But back to the Pimm’s. For those who don’t know, Pimm’s is a type of liqueur. A Pimm’s cocktail is a popular summer drink in England. You mix one part Pimm’s No. 1 with three parts Schweppes Lemonade (or 7Up or ginger ale); add mint, cucumber, orange and strawberry; and serve over lots and lots of ice. In past years, I’ve waited to meet up with the ladies before having my Pimm’s but Pimm’s has been a classic Wimbledon drink for over 40 years, and Wimbledon was just underway when MrB and I arrived in London on June 24. Everywhere we went, we saw signs declaring that it was “Pimm’s O’Clock” and as far as I was concerned it was Pimm’s O’Clock all day, every day, as long as I was in London. I was happily floating away in a sea of Pimm’s. I had my Pimm’s-iest moment at Wimbledon on Friday, June 28, the day before I met up with the bloggers. MrB had procured Wimbledon tickets, and I was happy to consume all kinds of Wimbledon snacks. In addition to the Pimm’s, I had a pint of prawns, with strawberries and cream for dessert. 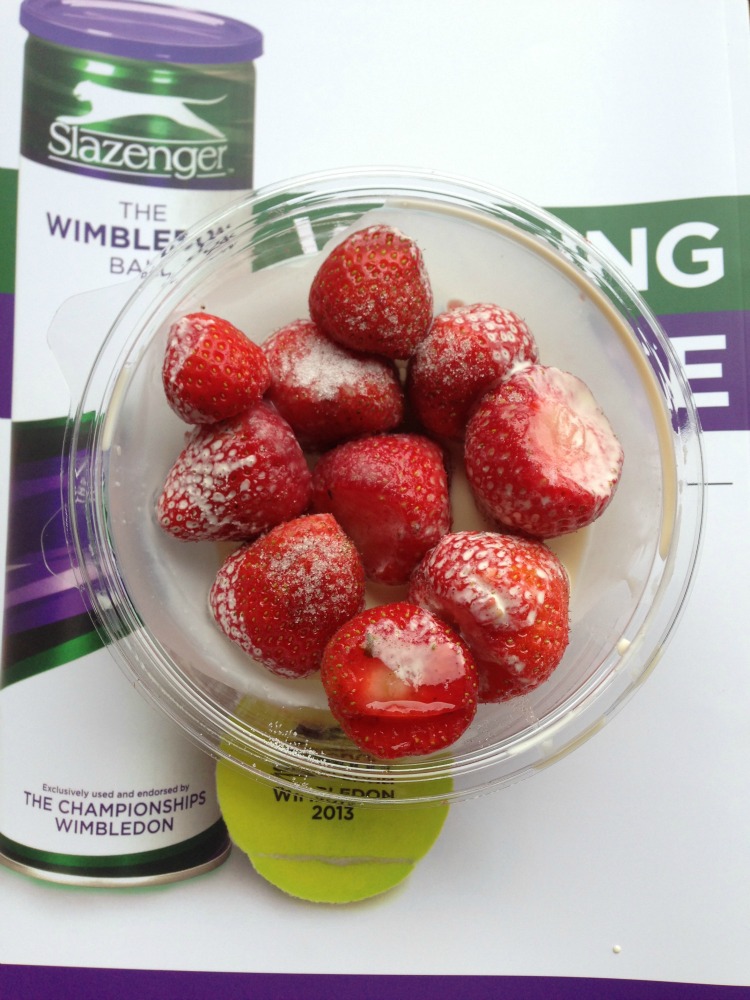 My strawberries were balanced on my program.

I even enjoyed the tennis! I’ve always hated sitting along the side of tennis matches, turning my head every second to watch the ball go back and forth (if you’re a serious Family Guy fan, you should remember the shifty-eyeball Peter Griffin montage that includes watching Wimbledon). MrB got seats at one of the court’s ends — opposite the Royal Box — which was so much better. Not only was there no head-turning or eyeball-shifting, but I could really see how the ball looked as it approached the player on our end. Interesting! We saw 19-year-old Laura Robson (the hometown favorite) beat Mariana Duque-Marino; Jerzy Janowicz defeat Nicolas Almagro; and, most importantly, Andy Murray of “Great Britain” beat Tommy Robredo. Andy was born in Scotland and, as the chap next to me informed us (the same chap who was giving the running commentary under his breath through every match), when Andy wins, he’s British. When he loses, he’s Scottish. Andy was British the day we were there. 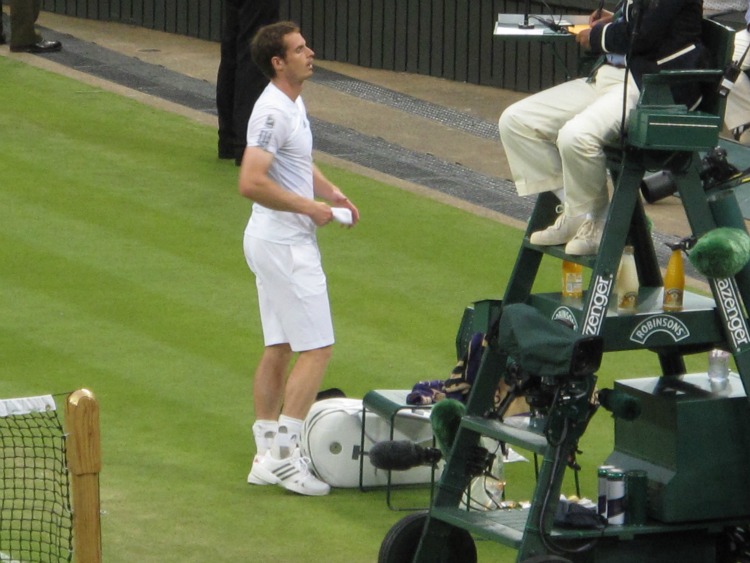 After he won, Murray through his sweatbands into the crowd.

The day was cold and rainy so I wore a trench coat, but an old one. I didn’t want to expose my new pleather-crocodile trench coat to the elements. 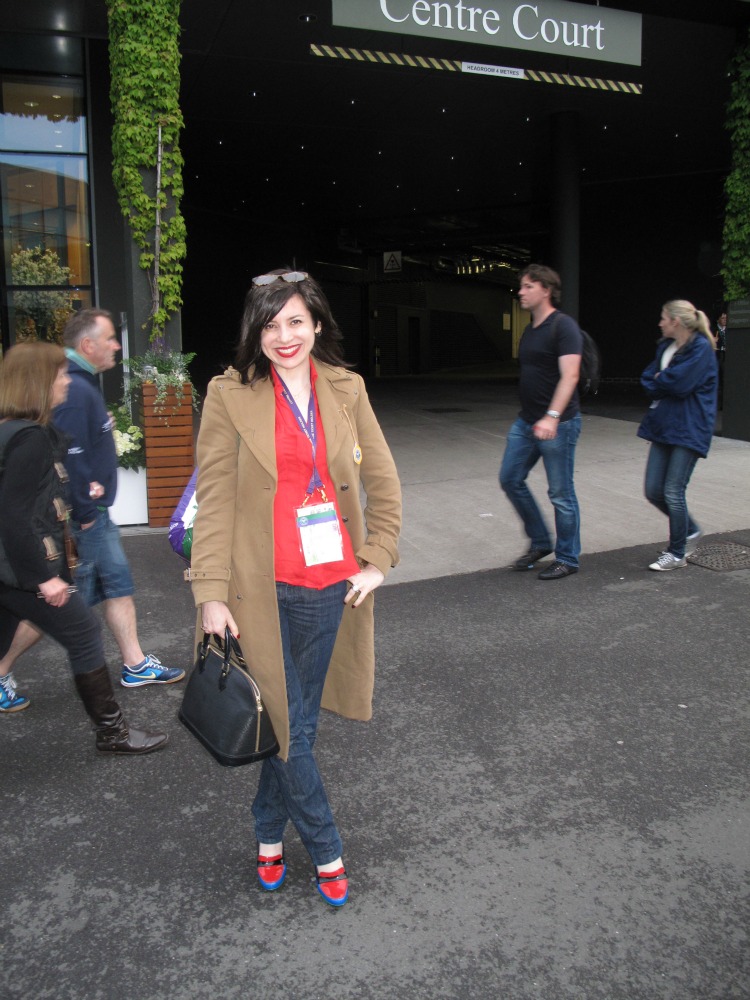 I will confess that I wore the exact same thing, minus the trench coat and the big Wimbledon badge, to meet the wimmins for Pimm’s the next day.  So if I smelled like a pint of prawns, ladies, now you know why.

Now that I think of it (the reading glasses in the photo reminded me), I did do a little shopping before the blogger Pimm’s Fest. MrB and I got to Covent Garden early so we wandered around, looking at all the street performers and  craft markets. We also got international, revisiting the Paris leg of our trip by getting some more Ladurée macarons and checking out the London branch of New York’s Opening Ceremony store. At Opening Ceremony, I got a pair of shoes. You’ll have to wait to see those, but you can see the Sunpocket sunglasses that I got at the same time. 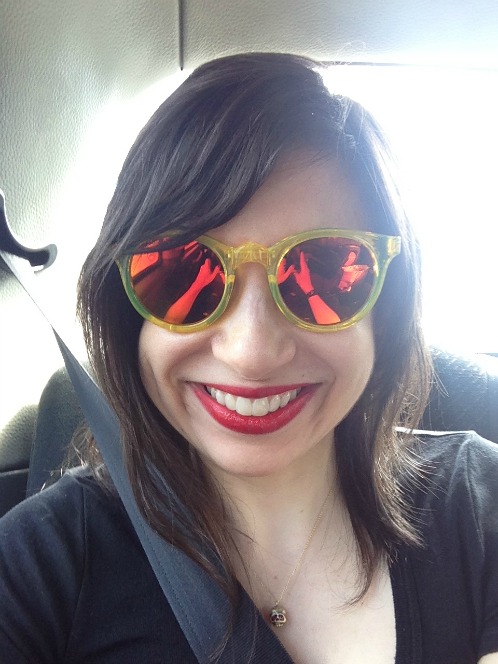 Selfie taken in London cab on way to the airport last Sunday.

These are very practical sunglasses — you can fold them in half and put them in your pocket or a small purse. (Click here to see how it works.) They are much more practical than some sunglasses I tried on Beauchamp (pronounced “Beecham”) Place in London earlier in the week. 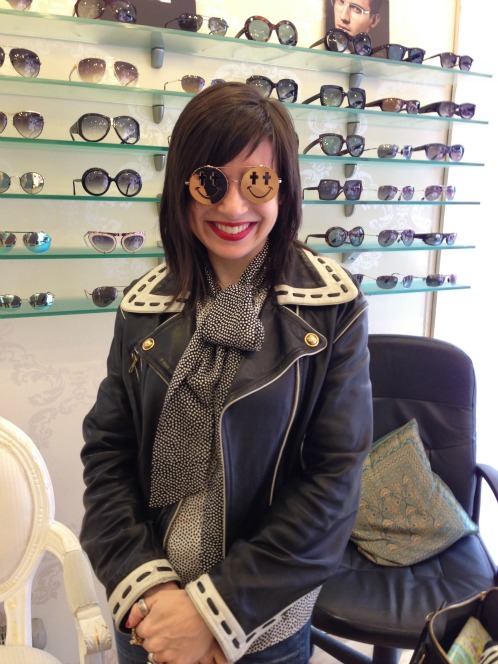 Turns out that you could flip the smiley faces up — there were regular glasses underneath. I still didn’t buy them. But I was as smiley as a pair of smiling sunglasses when MrB and I stopped for a late-night snack after The Book of Mormon. Can’t leave London without having fish and chips with lots and lots and lots … and lots … of vinegar. 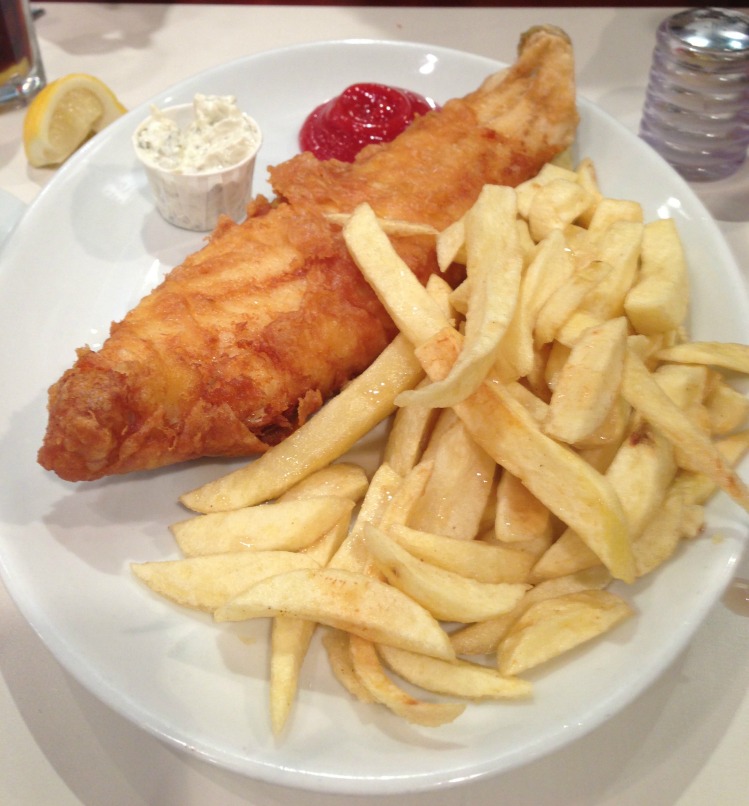 I wish I could have a plate of this right now!

The Cadbury Dairy Milk chocolate in London is a lot better than the U.S. version (I swear) so I got a few tons of it in the duty-free shop in the airport last Sunday. That’s keeping me happy in the sugar department, but in the alcohol department, I’m really pining for Pimm’s. I’m going to have to look up New York establishments that serve Pimm’s … and serve it the right way. I don’t want any poorly done Pimm’s to ruin my excellent Pimm’s Fest memories.

See you next year (if not before), ladies!

You might also like
What Wendy Wore: Zang Toi's 25th Anniversary Show
Super Halftime: The Shakira & J. Lo Show
Damn! Coco Has a Pair of Big Ones!
Previous Post: « Throwback Thursday: The 4th of July Outfit
Next Post: The Week in Review »