I watched the pilot episode of The Sopranos when it aired in 1999, and decided it was too violent and the whole mob-boss-goes-to-a-psychiatrist concept was too strange. I didn’t tune in again for years despite all the praise for the series. I’m like that with a lot of shows. They’re critically acclaimed and sweeping the nation, and I won’t get into them for one reason or another. I’m pretty immune to television-viewing peer pressure. 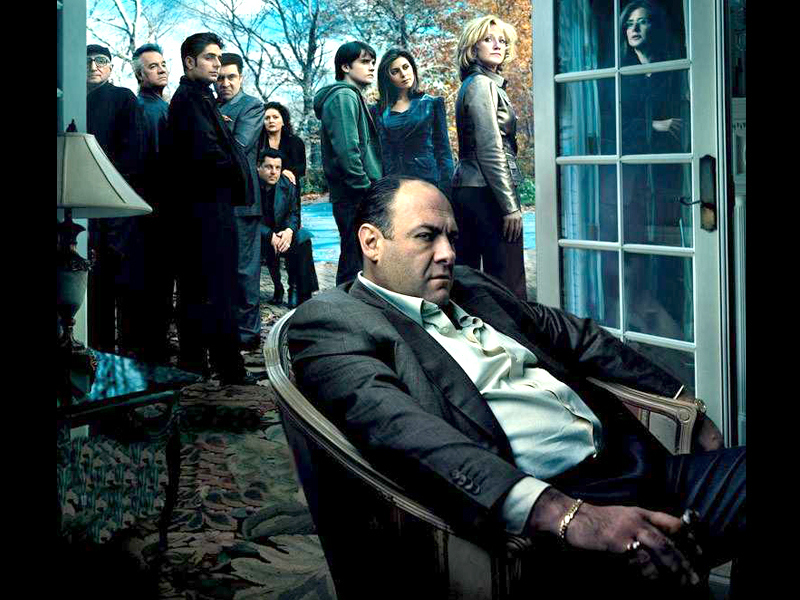 James Gandolfini and the cast of The Sopranos.

I changed my mind about The Sopranos after MrB and I had dinner with a friend who was/is an executive at HBO. The Sopranos was HBO’s pride and joy while it was on the air and our friend couldn’t believe I was missing out. He promised to send me the DVDs of the four seasons that had aired thus far.  The set arrived just as MrB left for a week-long business trip; right before he left, he bought a large block of cheddar cheese studded with jalapeno peppers. I had a job I hated at Lehman Brothers at the time, and I was alone with The Sopranos and a lot of spicy cheese so I figured why not give it another try?  I spent the whole week leaving the office as early as I could — I was out of there by 4:59 PM — in order to hurry home where I’d watch four or five Sopranos episodes in a row while eating jalapeno cheddar cheese. MrB came back to find that I had consumed the entire show and all of his cheese during what was turned out to be one of most weirdly pleasant weeks of my entire life.

After that, the HBO friend invited us to the premieres of the final seasons of The Sopranos, where I nearly came undone to see mob boss Tony Soprano — actor James Gandolfini — in the flesh. (I was too shy to say anything to him, but I did shake hands with Uncle Junior.) A year after the show ended with a Journey song and a shocking cut to black, I was still obsessed enough to buy some wine from Lorraine Bracco, who played the psychiatrist Jennifer Melfi. 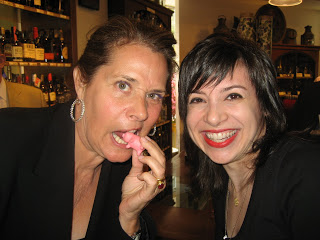 Lorraine Bracco obligingly posed with a small plastic pig I was carrying. Click to read the original post and the pig story.

When I saw Gandolfini’s name trending on Twitter last night, I feared the worst at first, but I refused to believe it. As I clicked on his name, I told myself, “Don’t worry! He probably got a big new role or said something interesting.” Alas! My initial instinct was correct: Gandolfini had died at age 51 — possibly of a heart attack — while in Italy. 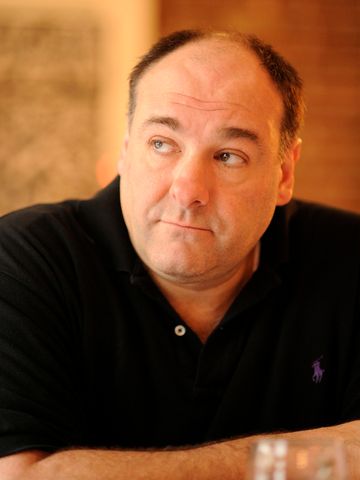 Of all the many tributes I’ve read online, this one by Matt Zoller Seitz is the most heart-warming.

CLICK HERE TO READ “A GREAT ACTOR, A BETTER MAN.”

And I’m going to share a story that isn’t truly mine to share because it happened to a friend of mine  (I hope she corrects me if I get any details wrong). Years ago, my friend was desperately trying to catch a cab in a downpour.  She wasn’t having any luck and was looking like a drowned rat when a big black SUV pulled up. The window went down and there was James Gandolfini laughingly asking her if she needed a lift.  When she told me she’d declined, I was devastated. “How could you NOT get in a car with Tony Soprano?” I wailed. I was 100% sure he would have been a perfect gentleman. Gandolfini played Tony Soprano, but he was very distinct from Tony Soprano in my mind. Some actors are so great at their jobs that people start to believe they’re playing themselves: they’re as noble or devious as the role they take on. Some of those actors are never able to move on from their signature role because the audience can’t see them as anything else. James Gandolfini played a lot of thuggish types (“Violent roles? Yeah. That’s all I got for a while,” he said in GQ in 2010) but he played them brilliantly without being taken over by them. And I liked the way he seemed to neither cling to Tony Soprano nor resent him. In 2007, as The Sopranos headed into its last episodes, Gandolfini told Vanity Fair, “It’s been a great opportunity, but I don’t have much trepidation about it ending. I think it’s more than time. Part of the fun of acting is the research, finding out about other people. As much as I’ve explored this guy, I don’t know what else to really do with him. I’ve been in one place for 10 years. That’s enough. It’s time for me to do other things.” It’s so sad we won’t see more of those other things!

UPDATED AGAIN TO ADD: Read this GQ story about how Gandolfini struggled with fame and his own demons.

You might also like
RIP, Henry the Dog
What Wendy Wore: Ben and Beau at Columbia Spectator Dinner
My Best Dressed at the 2020 Oscars Is ...
Previous Post: « Cindy Brady Wore Prada: FGI’s Rising Star Dialogues
Next Post: You Won’t Regret Reading This Story »