I don’t watch Saturday Night Live often, but if I’m around, I try to catch the “Weekend Update” segment. Unlike the skits, it’s always funny. “Weekend Update” anchor Seth Meyers will be leaving next season for his own late-night show, but last night marked the final appearance of cast member Bill Hader. Hader played Stefon, the flamboyant City Correspondent for “Weekend Update,” who barely managed to suppress his laughter while recommending clubs named things like “Booooooooof.” The clubs always have everything. In the case of Booooooooof’s “round-the-clock puke party,” everything includes: “Pugs, geezers, doo-wop groups, a wise old turtle that looks like Quincy Jones — and you’ll have your own When Harry Met Sally moment when you share a special kiss with Gizblow, the coked-up gremlin.”

Stefon also had a crush on Seth and I got kind of choked up when last night’s skit culminated in a happy ending for the two of them. No, not the kind of happy ending you’d find at one of Stefon’s clubs! Get your mind out of the gutter and click the photo to watch Stefon’s farewell on Hulu. 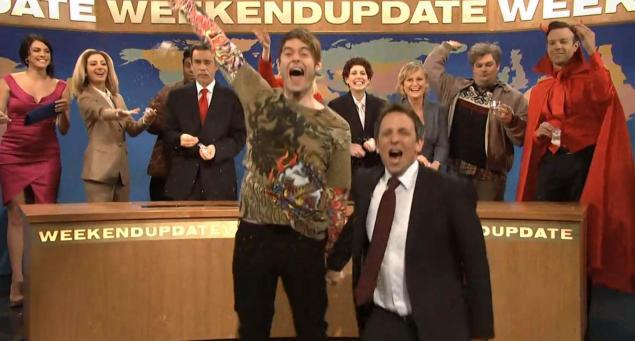 You can watch all of the Stefon appearances on Hulu here. If Hulu doesn’t work for you, Entertainment Weekly transcribed all 31 of Stefon’s club recommendations here. Even reading the definition of a subway sleeping bag is funny.

You might also like
The Week in Review
Week in Review: South Africa and Style.com
Recommended Reading and Week in Review
Previous Post: « Forever 21 and Topshop Are Amusing
Next Post: WWD Updates the Rihanna v. Topshop Story »