As I expected, many of the guests at tonight’s Costume Institute Gala at the Metropolitan Museum of Art wore beautiful evening gowns, rather than anything related to the “Punk: Chaos to Couture” exhibit that is being celebrated. Some of the gowns are very striking, but they’d be suitable for practically any red-carpet occasion. Actress Hailee Steinfeld had safety pins on her dress, but so what? It just looked like a pretty frock; I thought the pins were embroidery at first.

Original punk designer Vivienne Westwood is a Hall of Fame punk, so I didn’t count her when I picked my two winners of the evening. The first winner is Miley Cyrus. I had high hopes for Miley because she’s been working a punk-inspired style in real life. I would have been thrilled if she did something that created a scandal — can’t anyone carry a chainsaw these days? — but I can’t complain about what she did do.  The hair is perfect, the dark blush is exactly right and black fishnet over a nude look (by Marc Jacobs) is classic punk. Also, the expression! The pose! Well done, Miley.

Twenty-year-old Miley is tied for my Met Gala first prize with Linda Fargo, the 50-something fashion director of Bergdorf Goodman. Goes to show you how punk can work for any age! According to the Bergdorfs Twitter feed, Linda was wearing a rubber dress custom made by The Baroness (I wonder if that’s the same Baroness I met in the early ’90s!) and a jeweled harness by Hiro Hosomizu. Love the fingerless gloves and how perfect Linda’s natural white hair color is for the occasion. Very Daphne Guinness. 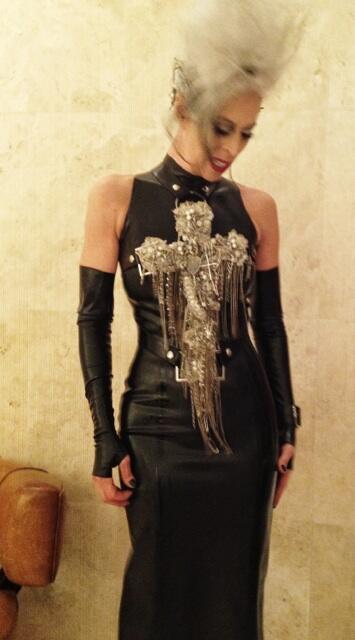 Here’s a great shot of the back. 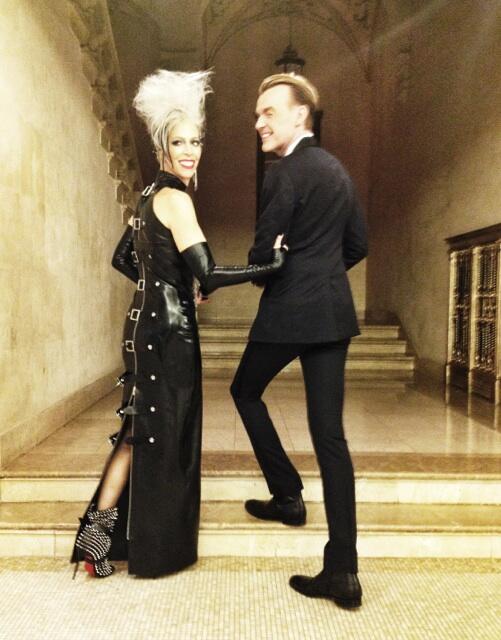 I was reading exciting things about Nicole Richie’s hair on Twitter, so I was let down when I saw her complete look. The effect is more modern Marie Antoinette than punk. 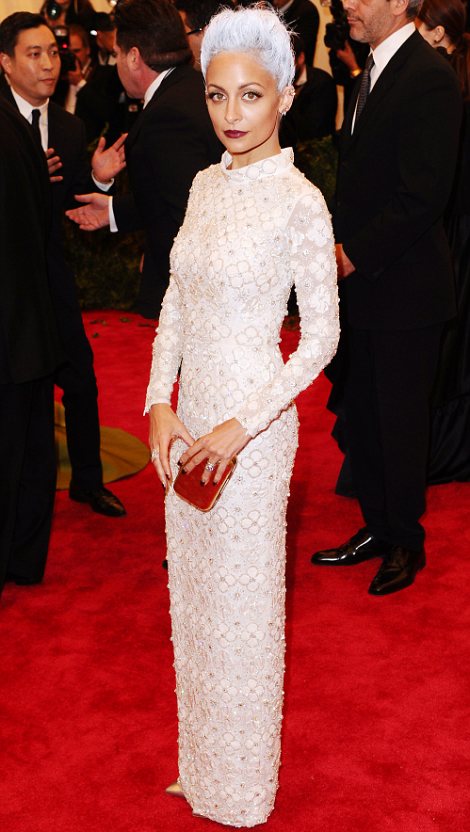 Some other attendees threw on a little dark lipstick or spikes or added a streak of hair color. That didn’t excite me, but I thought some safety-pinned hair was quite beautiful. Madonna gets an honorary mention for going for a Wendy Brandes-approved costume effect rather than “pretty” and Sarah Jessica Parker wore a good mohawk-inspired headpiece. Meanwhile, Vogue editor and gala host Anna Wintour didn’t even try in her unflattering floral Chanel.  Apparently, she explained, “‘[Met curator] Andrew Bolton told me the color of punk is pink, so I’m in pink by Chanel.” DAFUQ?! Anna is not 20 like Miley. She was AROUND for the punk years. She shouldn’t need a museum curator to tell her about what she saw with her own eyes.

In a class of his own was Vogue contributing editor Andre Leon Talley, whose photo was tweeted by Cathy Horyn of the New York Times. Behold! 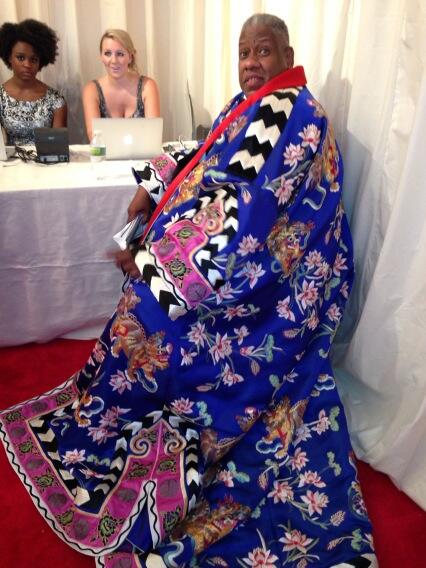 Now I’ve got “The Hills Are Alive” from The Sound of Music stuck in my head. Seriously, doesn’t ALT look like the Alps in the spring when they’re covered in wildflowers? I haven’t actually been to the Alps in the spring to see any wildflowers that might grow there, but now I don’t have to, because I feel in my heart that it couldn’t be any better than this. Thanks, Andre!

Read about what I would have worn: A tribute to punk goddess Wendy O. Williams.

You might also like
The Beatles on Ed Sullivan: 50 Years Later
Confession: I Worked for "Birther" Lover Lou Dobbs
She Looks Like Bjorn Borg to Me
Previous Post: « What Wendy Would Have Worn to the Met Gala: W.O.W. Style
Next Post: Wendy Brandes Jewelry in National Jeweler and Vice »