Our trip to South Africa comes to an end tomorrow. I’m sad to be going home — there’s still so much to see here.

The highlight for me was the safari at Thornybush Game Lodge. MrB and I went on two late-afternoon drives and two early-morning drives. I’ve already posted photos of the two cheetahs and the young leopard we encountered on the first drive. The leopard is one of the “big five” must-see animals on safari, and is the most difficult one to find. We were lucky to track one down on the first drive; we never saw another, only pawprints on the dirt road.

The other four of the “big five” animals are the elephant, rhinoceros, buffalo and lion. We found plenty of elephants on our first drive. As with the cats and all the other animals, we basically drove right up to the elephants and parked next to them. All of the animals are used to the open-top Land Cruisers and just continue going about their business. In this photo, I kept part of the car in the frame to show how close we were. 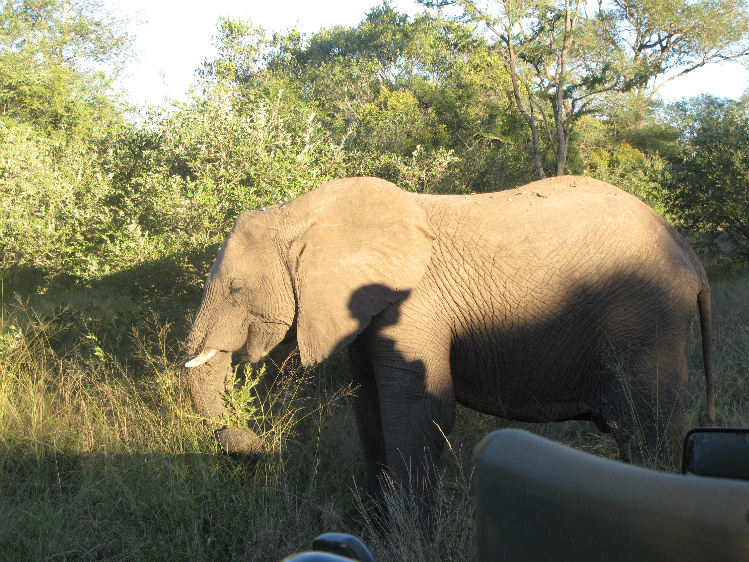 The shadow on the elephant is being cast by John, our intrepid tracker, who was perched on a special seat at the front the vehicle. I mean, the very front, where you’d normally find the bumper.

Later, a young elephant decided to come close and have a look at us. I guess he’s new to the business and doesn’t know how to act blasé yet. Again, I kept the car’s sideview mirror in the shot to give some idea of the distance. 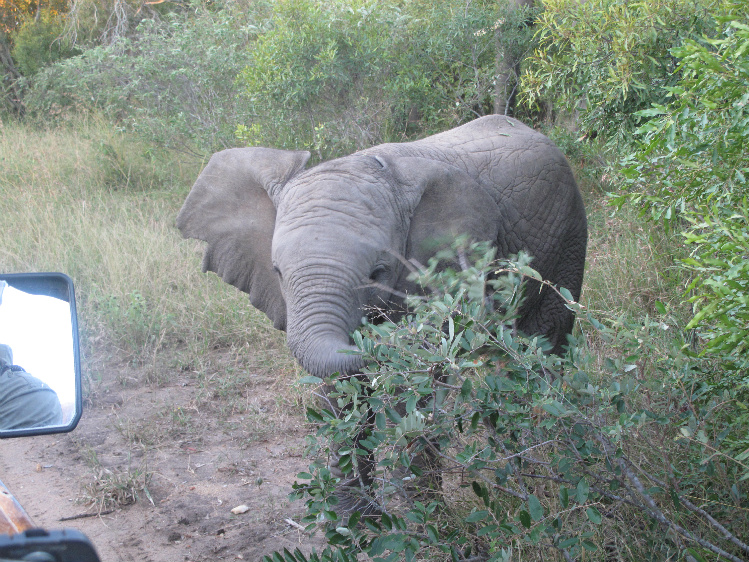 Before he could climb into the car with us, his mother came out of the bush and he walked away like, “I wasn’t doing anything, Mom!”

But my favorite elephant picture came from our last drive, which was a morning one (meaning 6 a.m.). You know how it is when you’re reaching to get something off a high shelf? Here’s the pachyderm version of that. 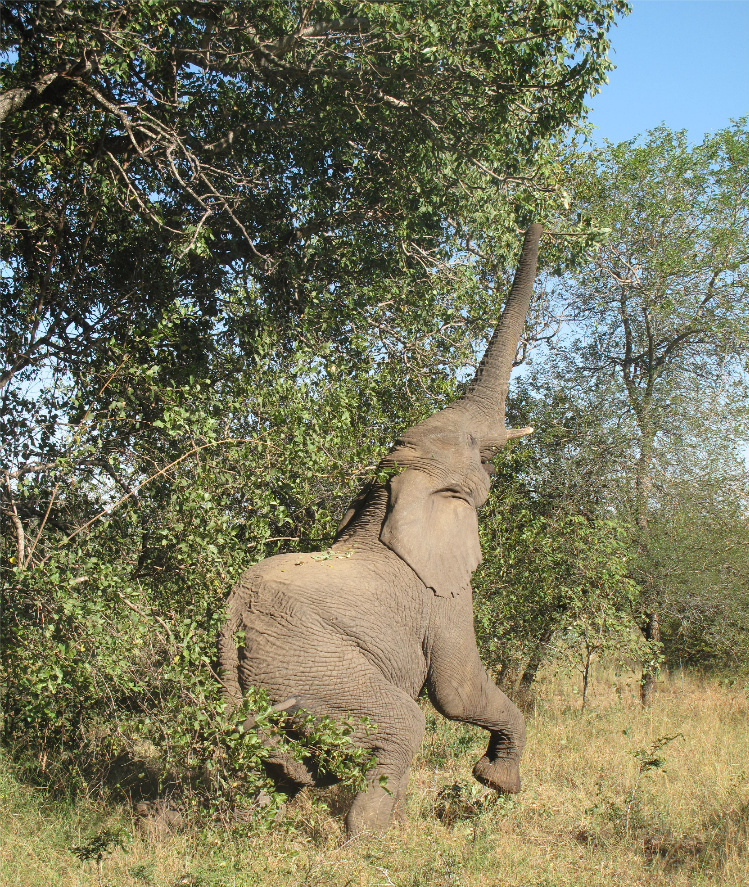 Look at how she’s holding her foot up! Photo by Wendy Brandes.

The rhinos were a little too exciting when we saw them on the first drive. Two males started having a dispute. They bellowed and lunged at each other at very close range, and I think Grant, our fantastic guide, was getting ready to peel out of there if they didn’t calm down quickly. Happily, they decided to deal with their territorial issues later, because those horns are mighty pointy. 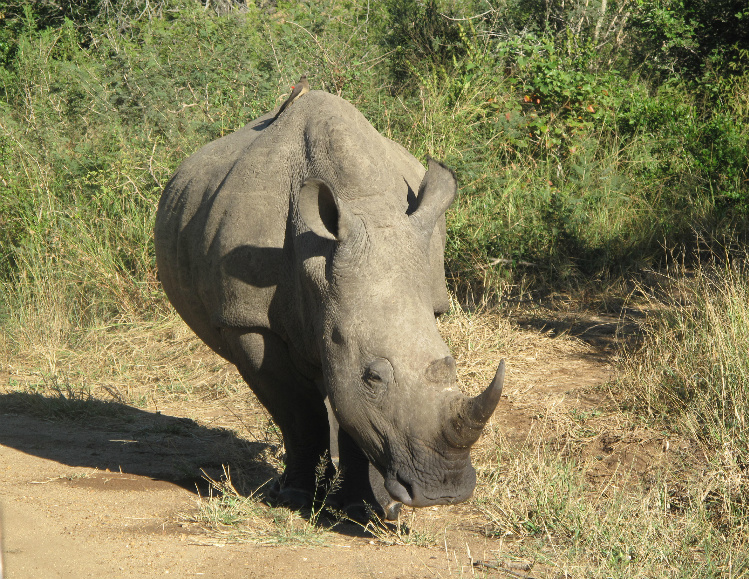 See the little bird on his back? Photo by Wendy Brandes.

We saw herds of buffalo, but my favorite was this old guy having a spa day. Life in the wild is pretty tough. Why not indulge in a mud treatment? 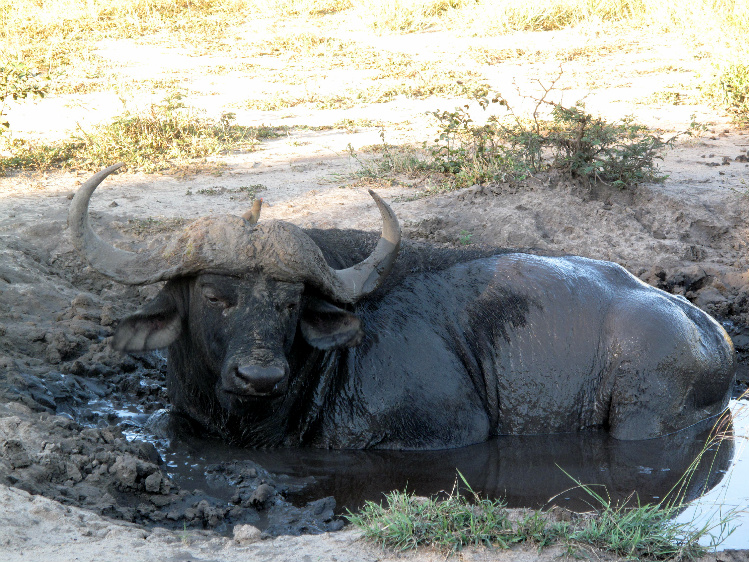 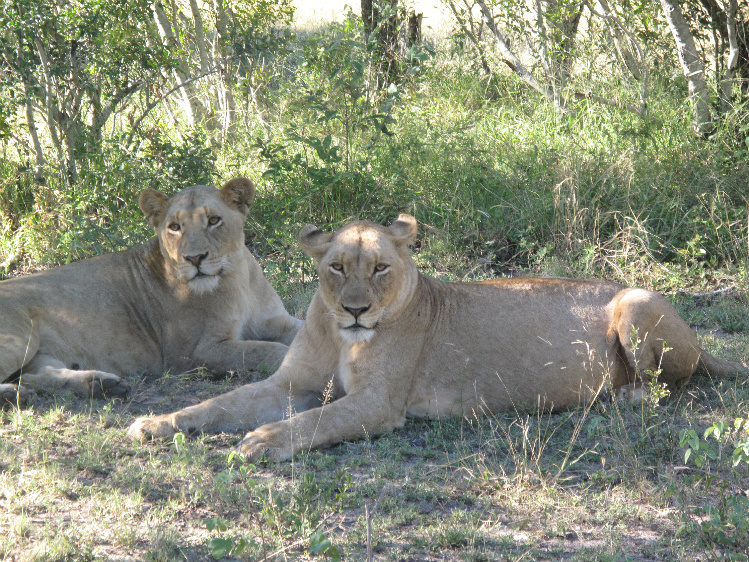 Their man friend was WERQing his mane big time. It reminded me of comedian Katt Williams’s routine about haters: “Sit back there and say my hair ain’t luxurious, when you know it is, bitch!” 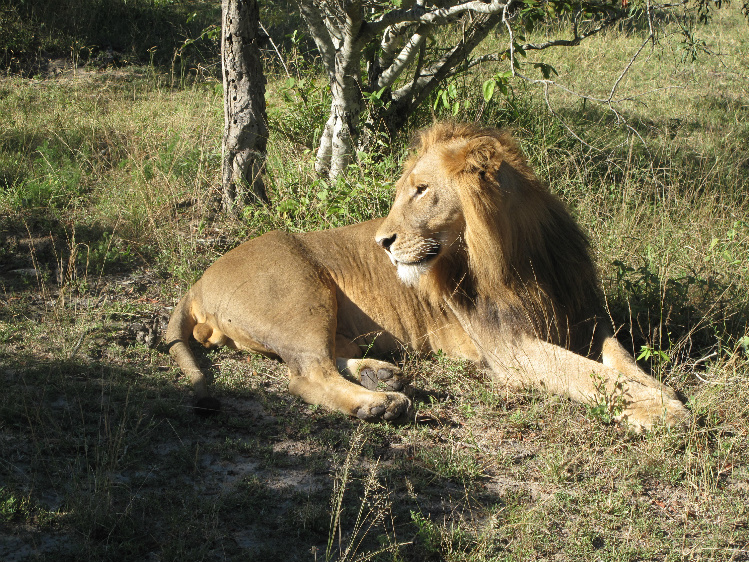 As exciting as all these sightings were, I saw something even more amazing from the comfort of our own room, where we had a little deck with a plunge pool. 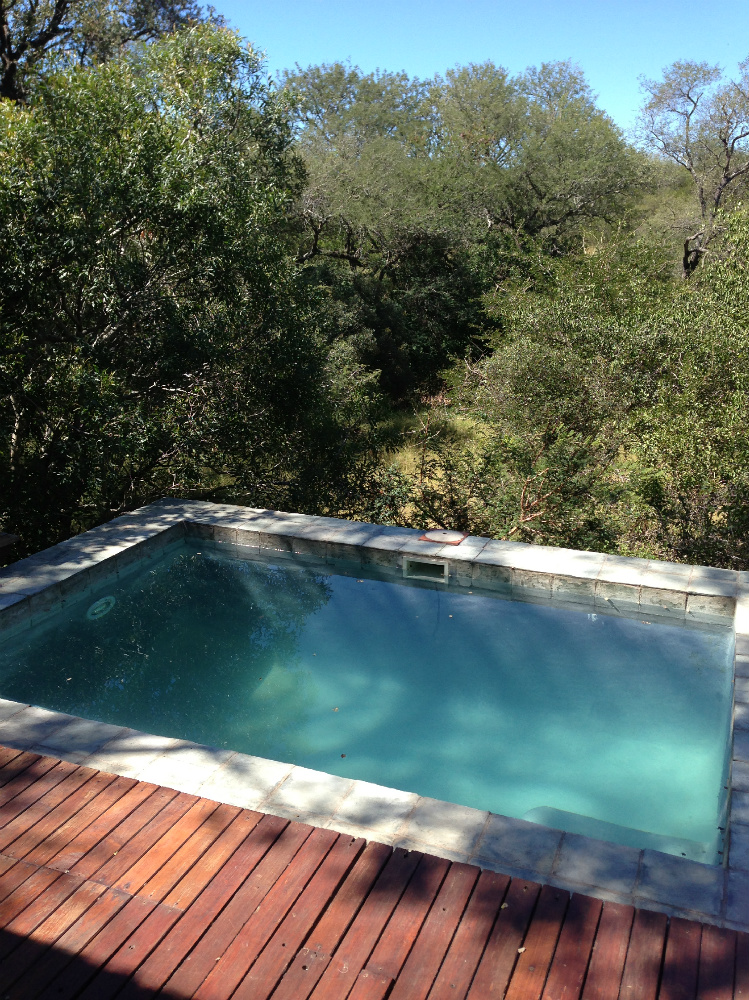 “I bet monkeys swim in that,” I told MrB when we checked in. The following day, as we rested between game drives, we were startled by barking baboons racing around our roof, while screeching vervet monkeys took over the deck. MrB and I went to the sliding glass door to keep an eye on the latter. Suddenly, a young monkey moved away from the group and approached the pool. 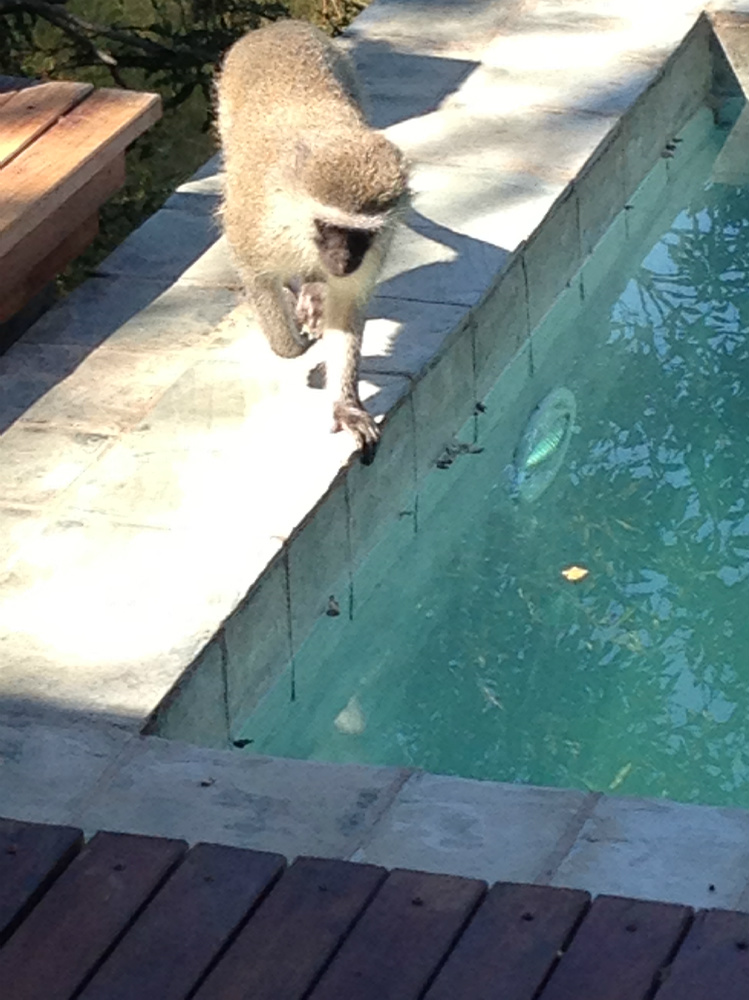 I thought he was going to get a drink. Photo by Wendy Brandes.

Then he dove in. 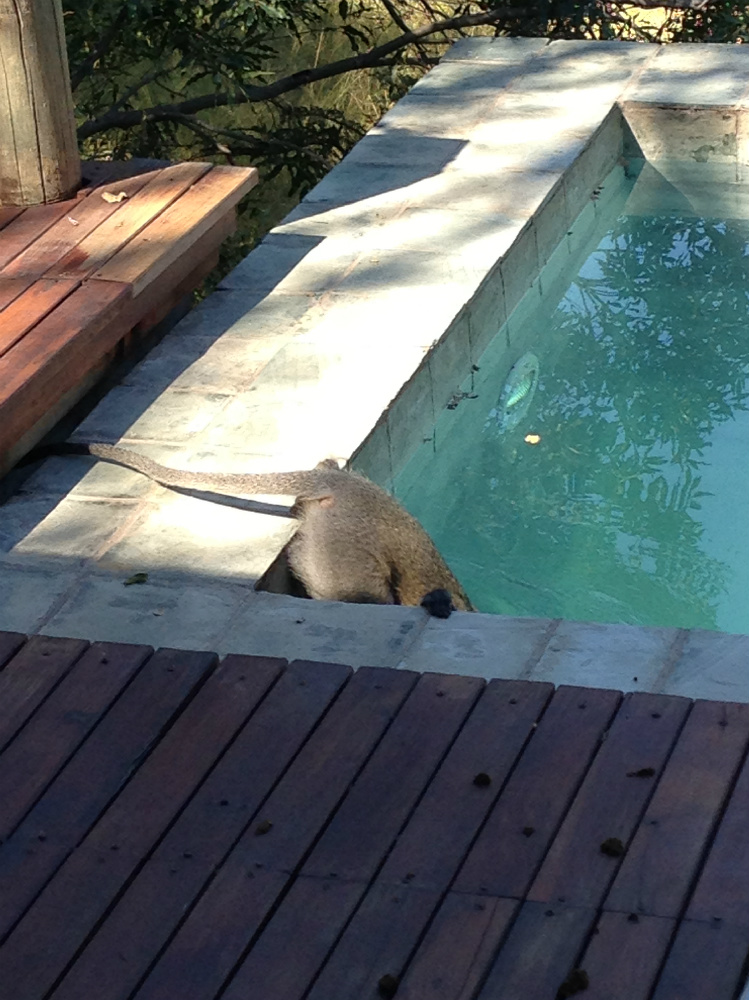 He swam a quick lap … 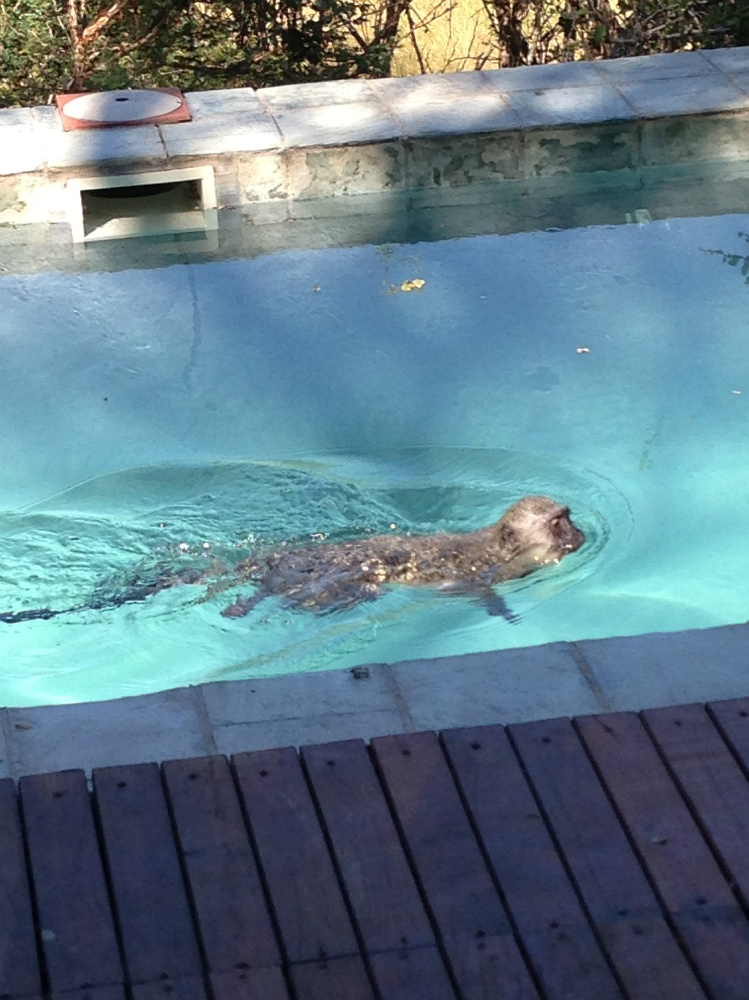 … then hopped out and shook himself off. 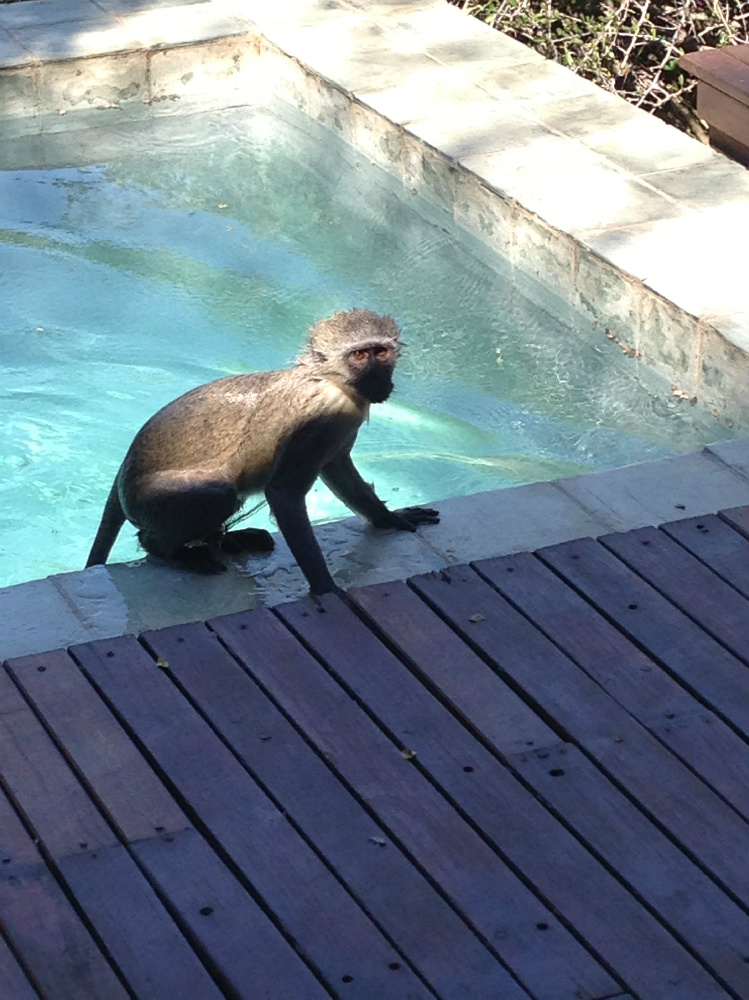 He’s looking like he expects me to bring him a towel. Photo by Wendy Brandes.

He peed ostentatiously on the deck before rejoining his friends. He came back with two of them to drink from the pool, and then the wet monkey dove in and swam another lap. He went away yet again, but returned for a third lap. I was pleased that my theory about swimming monkeys had been shown to be correct.

After the monkey business, MrB and I left to meet Grant and John for the 3:30 p.m. drive. On the way, we bumped into a visiting executive for the game reserve. He asked if we’d seen any interesting animals that day. I mentioned that we just saw a monkey swimming in our pool. He was like LOL WUT? No, you didn’t. Monkeys don’t swim. I showed him the photos. He hustled us over to Grant, who was equally disbelieving. Monkeys don’t like the water, he explained kindly. I showed him the swimming picture. He wondered if the monkey had fallen in. I said, if so, he’d fallen in three times. Grant then hustled us over to the other staff members so they could all look at the pictures and have an OH EM GEE moment. It was the talk of the lodge! Grant asked me to email him the photos, which he promptly posted on Thornybush’s Facebook page. 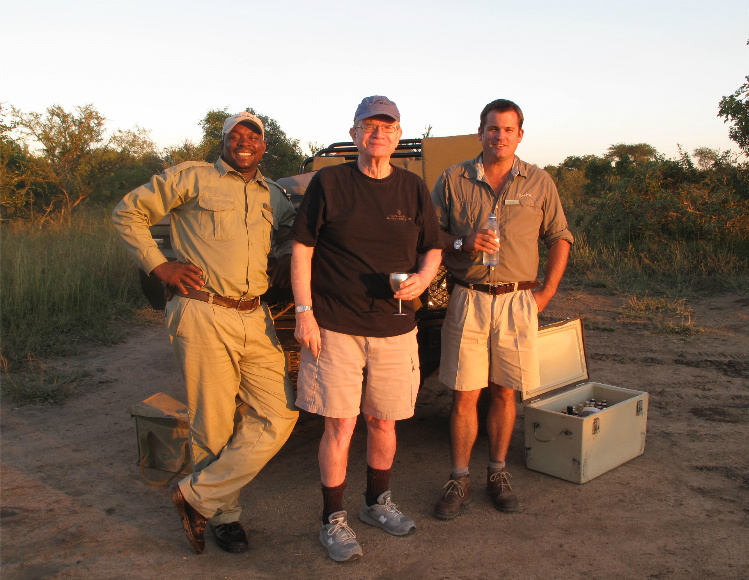 From left: John, MrB and Grant during cocktail hour in the bush. Photo by Wendy Brandes.

Who knew that the rarest of the rare animals would be in my temporary back yard? Now I think there should be a standard “big six” safari goal instead of the “big five,” with the sixth sighting being a swimming vervet monkey. If you’re going to Thornybush any time soon, improve your chances by requesting Room 20. Tell them I sent you!