All good things must come to an end, and so it goes for the entertaining Twitter hashtag #rihannaplane. For her 777 tour — seven concerts in seven cities in seven countries in seven days to promote her seventh album, Unapologetic — Rihanna took a planeload of journalists along. The journalists kinda lost their minds (and in one case, clothes) due to travel delays, lack of fresh air and sleep, and infrequent sightings of Rihanna. 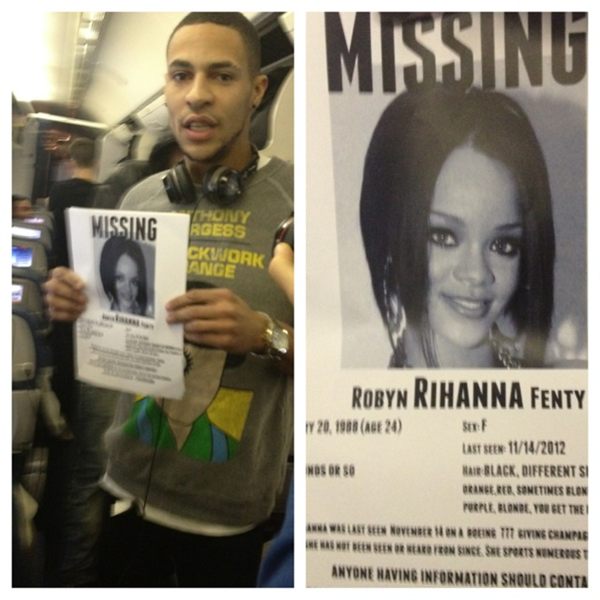 A great wrap-up of all the tweets can be found in Complex Magazine’s “The Oral History of The Rihanna 150: A #777 Survival Story.” You can also read:

Yesterday, the pop star, her plane and her captives returned to the United States for a final concert at New York City’s Webster Hall. The journalists greeted the end of the tour with joy.

Here’s what Rihanna had to say about it all. I must admit that I don’t feel all that sorry for the plane peeps because — even though Complex’s story says they’re all sick of talking about the experience — after a couple of days’ rest I’m sure they’ll be ready to dine out on this story for years to come. I would. Hell, I’d charge admission!

All of the #rihannaplane excitement reminded me that I never wrote about Rihanna’s November Vogue cover and editorial. Belated respect must be paid because BadGalRiRi is one of the only celebrities I’m delighted to see in a fashion magazine. 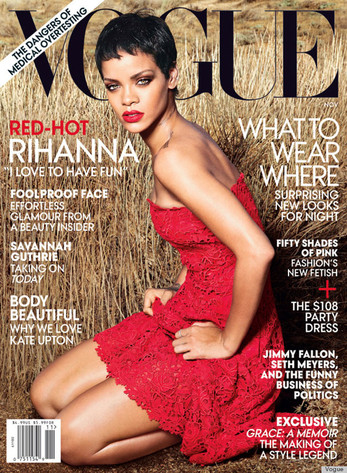 She out-poses any of the A-name-recognition, B-plus-fashion actresses slapped on magazine covers AND she out-sexies the models at the Victoria Secret’s runway show? This girl is 1990s supermodel fierce. She can do no wrong in front of the camera as far as I’m concerned. 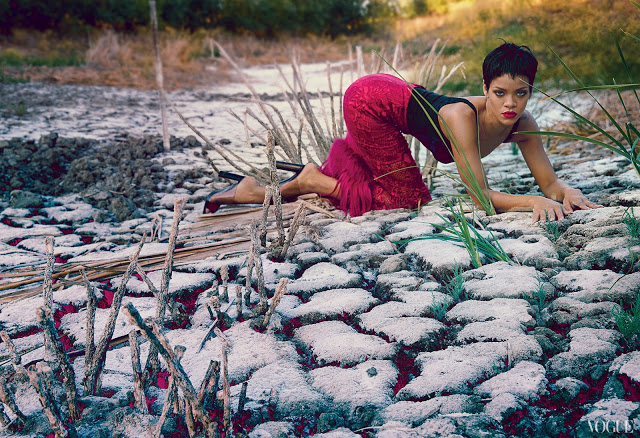 Click to see the rest of the Vogue photos on LoveBrownSugar.

I’ve decided that, in general, music-industry people are better suited for fashion magazines than actors. I think that’s because a distinctive personal style is such an important part of the package in music. Rihanna benefits from being as Rihanna-y as she can be. There’s a reason why, in the ’80s, we all wanted to be just like Madonna and not like her Desperately Seeking Susan co-star Rosanna Arquette. The examples are endless, and can be found in any decade. There was Elvis and his rockabilly pompadour. The Beatles and their matching suits. Michael Jackson and his glittery military jackets and single white glove.  Adam Ant and his facepaint. Joan Jett and her black shag and blacker eyeliner. Run-DMC and their chains, Adidas, and Kangol hats. Salt-N-Pepa and their asymmetrical haircuts and doorknocker earrings. Britney Spears and her mane of hair and teenage abs. Beyonce with her mane and her abs. Lady Gaga. Nicki Minaj. In September, I saw ZZ Top play a fashion-week party introducing the limited edition, John Varvatos-designed Chrysler 300. Sure, ZZ Top’s songs are totally iconic … but so are their beards! The audience was going crazy the minute those beards appeared on stage, before a note was played. 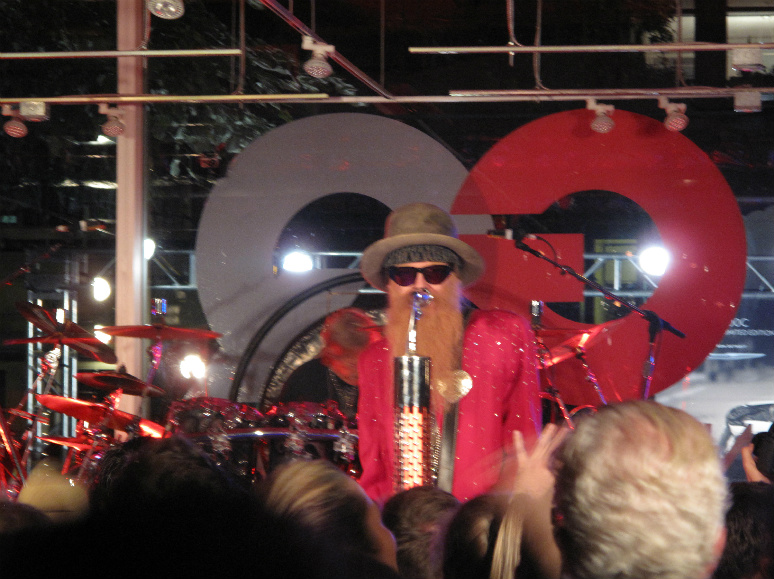 Meanwhile, what actors have had a distinctive personal style since the days of Marilyn Monroe and Audrey Hepburn? The androgynous Tilda Swinton is one of the rare ones. Johnny Depp is distinctive even though he seems to have gotten his style from Adam Ant and Keith Richards. There’s English eccentric Helena Bonham Carter and couture-worthy Cate Blanchett. But the majority of actors — as physically attractive as they might be — are usually fashionably bland in a scared-to-offend, dressed-by-stylists way. Of course, that makes sense for the profession. An actor should be able to disappear into a role, while a musician’s personality is his or her brand. That’s why I always wondered why Madonna wasted time trying to be an actor. She was her perfect Madonna-y self in Desperately Seeking Susan. Why hide that light under a bushel by pretending to be someone else?

If fashion magazines have to put celebrities on covers instead of models, I vote for musicians every time. Keep the actors in Hollywood where they belong!

UPDATED NOV. 22, 2012, TO ADD: Yesterday’s New York Times review of Unapologetic emphasized the role of Rihanna’s image in her success. While it didn’t focus on her style, it’s obvious how fashion plays a role in creating a persona that is, as the Times put it, “steely and unforgiving and bulletproof.”

Also, here’s the link to Billboard’s final post on the 777 Tour. Great essay, even though I don’t believe the last sentence!

You might also like
My Best Dressed at the 2018 Grammys Is ...
My Almost-Husband and the Old House
Thirty-Five Years of Madonna Fandom
Previous Post: « New Nail Art by Tracylee Percival
Next Post: Happy Thanksgiving, I Guess »