Early yesterday morning, I went to vote at my local Mormon church. It was mayhem. The lines weaved in and out of the pews so that confused people were constantly getting on the wrong queue; instead of the voting machines we had in the past, we got SAT-like forms with bubbles to color in with a pen; and, at the standing desks we used, everyone behind you could see what bubbles you were filling in, so, really, what did it matter if you Instagrammed that shit or not?

Inching my way through this maze gave me time to think, and what I thought about was the common threat to move to Canada if the candidate of one’s choice doesn’t win. I have nothing against Canada. I’m a big Rush fan. But a move to Canada doesn’t seem very ambitious to me. Dream big, people! Like, if so-and-so doesn’t win, godammit, say you’re going to move to:

Not only that, but your money is going to be so pissed off that it won’t even come with you. It’s going to move to Switzerland and the Cayman Islands in protest. Forget Canada, bitches. Go for the glamour.

But that’s advice for y’all. I don’t plan to move anywhere. It’s enough for me to drag my ass to another Manhattan neighborhood, which is what MrB and I did for an election-night party. I decided to wear my Stacy Lomman Wardrobe Therapy outfit #3. Stacy came over on Monday night and she put this outfit together along with SEVEN others. I think I now have close to 20 new outfits thanks to Stacy and we’re still not done going through everything. I’m going to have to pretend I’m a press-seeking starlet and start doing multiple wardrobe changes during the day to take advantage of all these new options! It’s truly amazing.

One thing that has become clear to me is that my surprisingly ladylike fashion direction resulted from my stuffy corporate jobs. I couldn’t stop laughing while showing Stacy an ultra-conservative gray skirt suit that was considered “sexy” at Lehman Brothers. (You will eventually see the jacket and skirt worn separately but never again together.) That’s how I got into the habit of collecting pieces with ultra-feminine details. If you’ve got to wear a boring suit, it’s better to look like a pretty hourglass than a cardboard box, right? 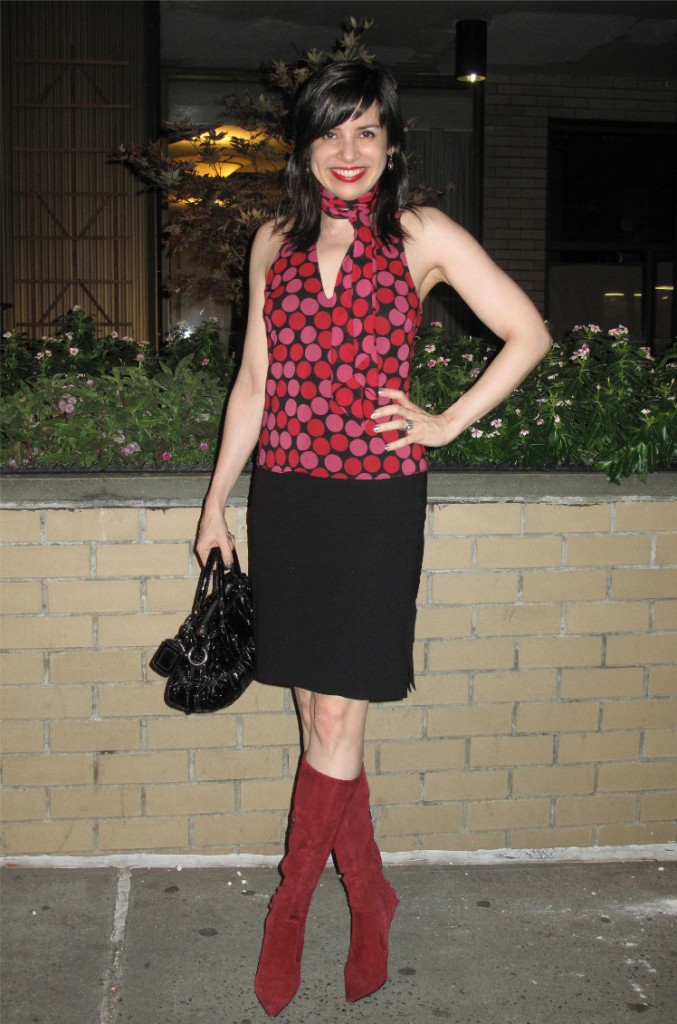 While we were going through my wardrobe, Stacy kept pulling out items like the top and boots above and asking me how I wore them in the past. My answer in every case was “with jeans.” It wasn’t that I didn’t wear what I have; I just didn’t maximize its potential. So, for the sake of a little adventure, I enjoyed pairing my polka-dot top with my red boots. The other thing I loved about this outfit? The newest piece in it is four years old. Homegrown vintage, people. That’s my thing.

Remember, if your wardrobe needs some therapy and you’re in New York’s tri-state area,  you can call Cross It Off Your List at 212-725-0122 and ask for an appointment with Stacy Lomman. I enthusiastically recommend it.