I tried to get an interview with someone from Converse for my Huffington Post wedge sneaker story, but, unfortunately, it didn’t work out. I wanted to ask the company about its sales because it seems to me that Converse’s classic Chuck Taylor sneaker — whether low-top or high-top — has become more popular than ever over the past few years.

I’ve noticed this in New York, but I’m hyper-aware of it when I’m traveling to other cities and observing what both the locals and tourists wear. For instance, I have long kept an eye on the shoe situation in Paris because, despite Parisians’ reputations for head-to-toe chic, I think the footwear there has nothing on New York. (Sorry, French peeps!) A couple of summers ago, I noticed an increasing number of Converse-wearers in Paris, which I considered an improvement. This June, there were even more, plus plenty of Isabel Marant and Marant-style wedge sneakers. I was obsessed with the Converse situation by the time MrB and I moved on to London. That’s where I started counting Converse — during a 30-minute walk I counted 34 pairs and those were just the ones where I could clearly see the Converse name on the shoes. I excluded unverified but Converse-like styles from my tally.

I was fascinated by the variety of people who sported Converse. It’s not like it was in the ’90s when Chucks were mainly for rebels like Kurt Cobain. 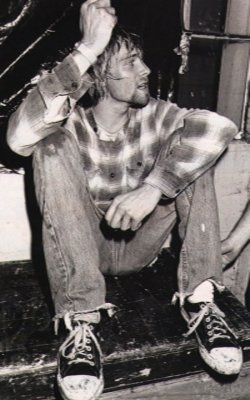 I saw the shoes worn by whole families, including parents and their pre-teen children; fashion-conscious teenage girls who clearly put a lot of time into their appearance; skate punks; and businesspeople trudging to work in their suits.

So is it just my imagination? Or have Chucks taken over the world? These days, Converse offers more options than I ever dreamed of when I first coveted a pair of Chucks in the 1980s: there are styles including double laces, fold-over high tops, multiple-tongued sneakers and slip-ons; a rainbow of colors; and collaborations with design houses Missoni and Marimekko. There are country-flag Converse, Dr. Seuss Converse and DC Comics Converse. You can even design your own Chucks on Converse.com.  But the sneaker that would have thrilled the teenage me the most is the 16″, zip-up, XX-Hi style (you can customize it too). 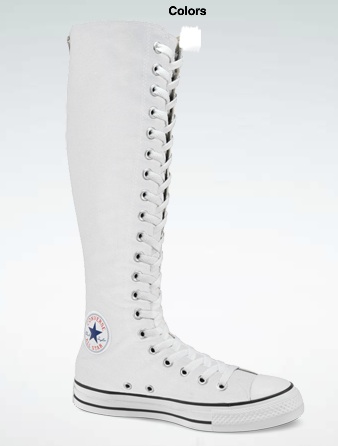 If I had been able to wear that sneaker when I was a kid, I wouldn’t be here today because I would have died from my own coolness. At least I would have gone with a smile on my face! Luckily, I’m made of stronger stuff now, because if Converse comes out with a black leather version of this with a 4″ wedge, I’m getting it. Consider that a pre-order, Converse folks!

UPDATED TO ADD: The Atlantic has a story called “The Racial Divide on … Sneakers” that has some interesting Converse history in it.

You might also like
Wendy Davis's Sneakers, Anna Nicole & the Weeks in Review
Slow-Fashion Sunday: Shoes That Last
Out With the Old-Old Haring Kicks, In With the New-Old
Previous Post: « Vogue Paris Features Wendy Brandes Jewelry
Next Post: New Necklaces for Nasty Girls: STFU and GTFOH »