I make custom engagement rings for all budgets and, as I’ve said before, I prefer the woman to be involved in the design. If the bride-to-be is not personally meeting with me because the man (or woman) who is proposing is trying to maintain some element of surprise, I want him (or her) to come in with pictures the ring’s intended recipient has torn out and/or specifics she has written down. Trust me on this. It’s much better for the lady to be thrilled with her ring than 100% surprised by the proposal but disappointed by her jewelry. Well, to be honest, I don’t mind if a few women are bummed out by their rings because I just so happen to specialize in engagement-ring redesigns. But I only enjoy redesigning rings that were purchased from other jewelers. If I’m doing the original ring, I want to get it right the first time!

My gorgeous graphic designer Lori Kadezabek — who is responsible for the look of my website and blog — told me a while ago (a) her fella, Brian “Roley” Riolo, had my contact information and (b) she dreamed of a non-traditional engagement ring. I thought she meant that she didn’t want a classic, prong-set, round diamond solitaire, so I threw out a couple of ideas about different gems, cuts and settings. Lori absorbed those, then got back to me and told me what she really wanted was an engagement-ring version of my Edburga poison ring. 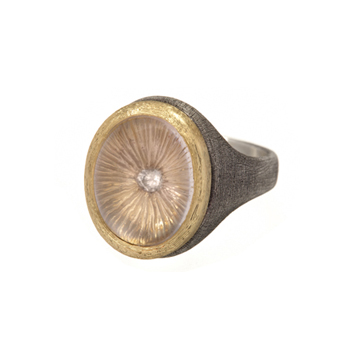 I can promise you that neither I nor Brian would have guessed that! 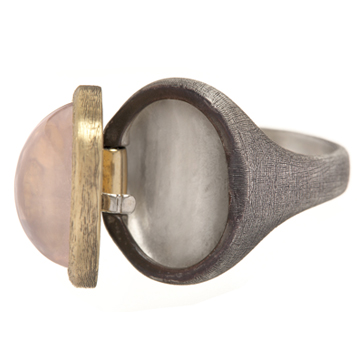 Engagement rings experience a lot of wear and tear because many women never take them off (I always take off all my jewelry at home, and I never wear any to the gym, the pool or the beach). I told Lori I’d like to make adjustments to my original design to make a ring more suitable for constant use. Mechanical elements in jewelry are always delicate, so Lori’s ring wouldn’t open and close like my Edburga. I’d make the shank out of blackened 18K white gold instead of blackened sterling silver. And I wanted to swap out the original cabochon-cut rose-quartz stone — through which you can see a diamond — with a white sapphire. The Mohs’ scale of mineral hardness rates gems and other minerals from 1 to 10, with 10 being diamond, the hardest naturally occurring substance. Rose quartz is a respectable 7, but sapphire is 9, and white sapphire is often used for watch faces because it doesn’t scratch easily. To give the stone the pink hue of the rose quartz, I’d set it in 18K rose gold rather than the yellow gold of my original design.

When Brian emailed me this year and told me it was time, I placed an order for a custom-cut white sapphire and got to work, finishing up in time for Memorial Day weekend. That was perfect, because Brian had a beach proposal in mind. Lori and Brian first met briefly in the summer of 2005 on the beach in Manasquan, N.J.  A couple of months later, they ran into each other again at a mutual friend’s birthday party and had such a blast they became drinking buddies … then best friends … and then, within another couple of months, boyfriend and girlfriend.

After the weekend, Lori emailed me the whole story:

“We were at our family’s beach house and [Brian] tried to get me to take a walk to the beach with him a couple different nights — and I’m usually always down for a night walk on the beach but for some reason I just wasn’t this weekend. So Monday (Memorial Day), we spent the whole day on the beach and decided to call it a day around 4 PM to head to a local store to shop for some board shorts. On the drive down to the store I mentioned that I wanted to take a walk down by the bay later and that I love it down there. We shopped, ate, drank wine, and a few hours later, he asked if I wanted to go to the beach for the sunset. I was like, ‘Umm the sun doesn’t set on the beach — it sets on the bay’ and he said, ‘That’s perfect, didn’t you want to go down there anyway?’ Done and done.”

“We were taking pictures, sitting on the bench just chilling and watching the sunset. After the sun set, we’re just chatting about whatever and I sit on his lap to give him a hug or whatever and he tells me he loves me and gives me a kiss. I turned around for a second and before I know it there is an (amazing) ring in front of me and he is asking me to marry him!!! I was shocked and kinda didn’t believe it was happening … I think there may have been a ‘Shut up, really? You finally love me?’ and I think maybe a ‘pinky promise?’ was thrown in there. It was perfect … just like my RING!!!!”

While I shed a few happy tears for Lori and Brian after re-reading that, you can look at some photos. Here’s Brian getting a kiss and looking all like, “SHE SAID YES!” 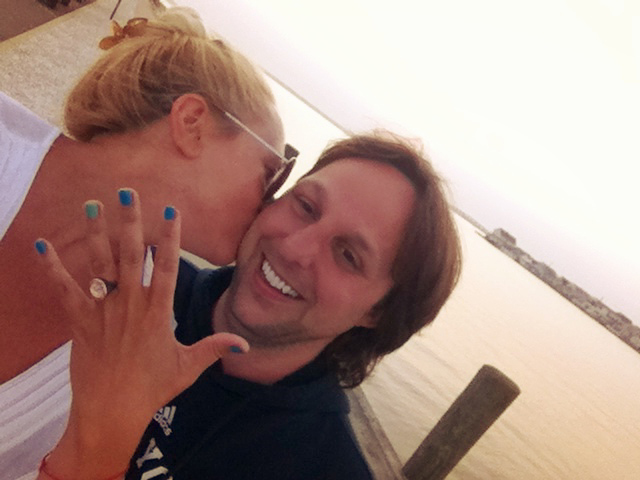 Here is a closeup of the the ring — July’s Jewel of the Month. The picture was taken by photographer John Muggenborg (also an engagement-ring customer of mine). 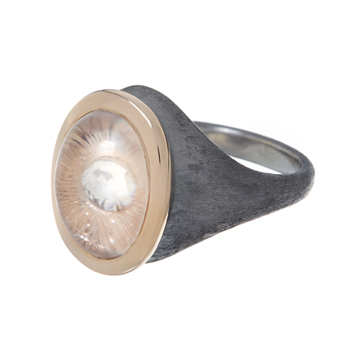 As you can see from the front view, the way the light passes through the white sapphire makes the perfectly round diamond underneath the sapphire look oval, creating a striking cat’s-eye effect. 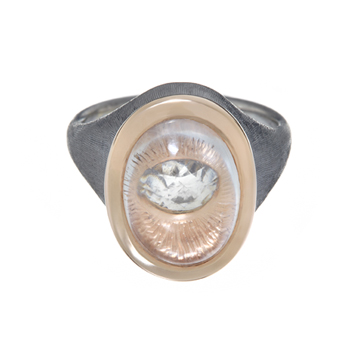 I got another email from Lori this month that said, “I cannot even tell you how many peeps are loving my ring! They think it’s the coolest thing ever, they’ve never seen anything like this before, and it’s so perfectly ‘me.'” 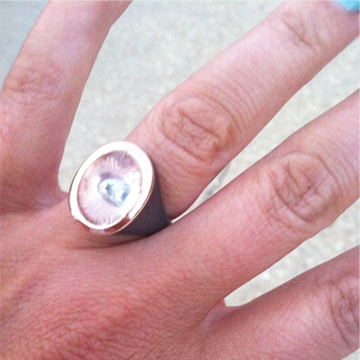 The ring on Lori.

I’m thrilled that Lori is thrilled. All engagement rings are special but this one probably takes the (wedding) cake because it’s so unique. I’m sure the November wedding will be equally special. Congratulations again, Brian and Lori! 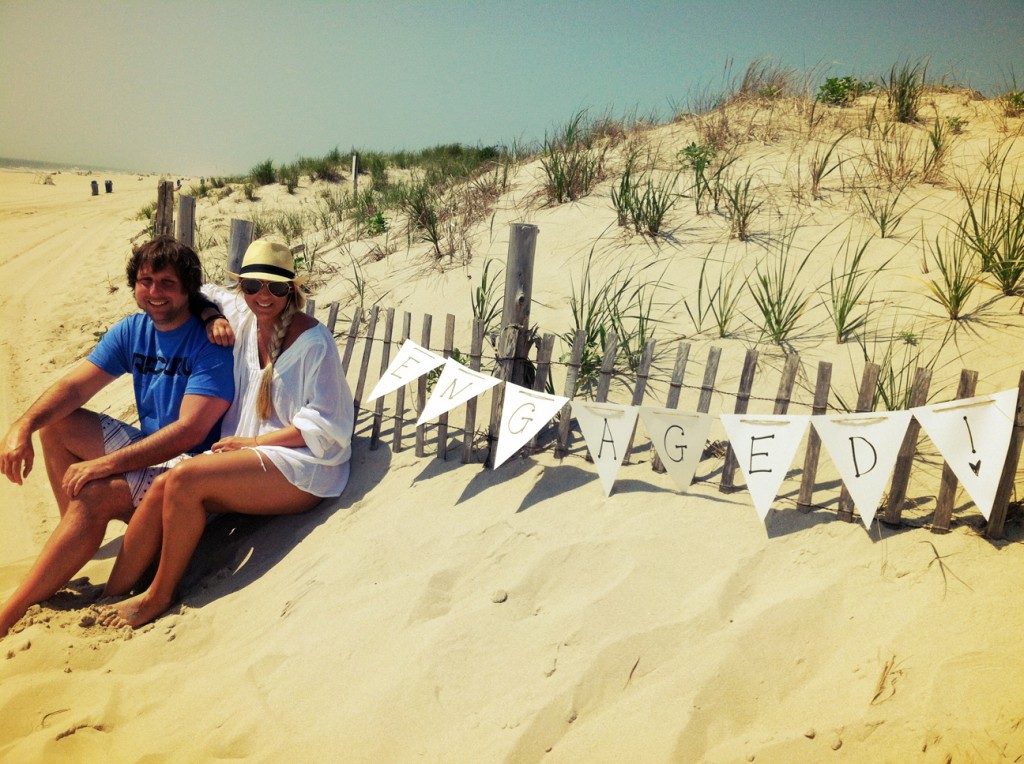 Oh, and for the rest of you, my original Edburga ring is available exclusively on my website. There’s only one left. Purchase it here!