I can’t let the day go by without wishing a happy 70th birthday to my almost-husband Paul McCartney. I totally would have married the guy, but I have a thing for younger men and MrB doesn’t turn 70 till August. Call me shallow! 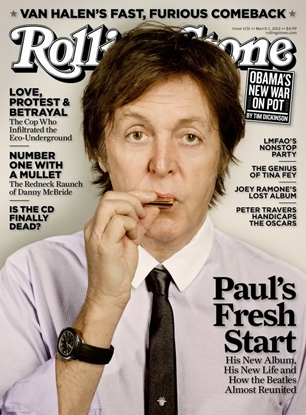 But, seriously, I like what McCartney had to say about age in an interview that ran in the March 1, 2012, issue of Rolling Stone:

“Twenty years ago, when McCartney turned 50, he remembers his then-manager pushing the idea of retirement. ‘It’s only right,’ he was told. ‘You really don’t want to go beyond 50, it’s going to get embarrassing.’ In June, McCartney will be 70 (‘I’m never going to believe I’m 70, I don’t care what you say,’ he says. ‘There’s a little cell in my brain that’s never going to believe that’), and he still has no plans to stop touring or recording. ‘You get the argument “Make way for the young kids,”‘ he says. ‘And you think, “Fuck that, let them make way for themselves. If they’re better than me, they’ll beat me.” Foo Fighters don’t have a problem, they’re good. They’ll do their thing.

“‘If you’re enjoying it, why do something else? And what would you do? Well, a good answer is “Take more holidays,” which is definitely on the cards, but I don’t seem to do that. I love what I do so much that I don’t really want to stop. I’m just kind of casually keeping an eye on how I feel, and onstage, it feels like it’s always felt. So for the time being, the band’s hot, I’m really enjoying myself, still singing like I sang, not experiencing, touch wood, any sort of problems to speak of. If it ain’t broke, don’t fix it.'”

Macca’s right: You Only Live Once. Have as much fun as possible. Morrissey, take note!

You might also like
RIP, Cynthia Lennon
Musical Interlude: My Almost-Husband, Paul McCartney
Wanderlust 2014: I Tuned In to Liverpool
Previous Post: « Words of Wisdom From Wayne Gretzky
Next Post: Wendy Brandes Jewelry in July’s W Magazine »