While doing some research for my next Huffington Post story on fashion-blogger trends, I came across this amusing 1984 observation from New York Times journalist John Duka:

“One of the requisite skills for sitting at a fashion show is being able to roll your eyes, talk to the person behind you, chew mints and say ‘Yves Saint Laurent did it better years ago’ all at once.”

Still true! Sure, a few of the show attendees are now teenage bloggers, but the skill set is the same.

John Duka’s personal story is an interesting one. He married former Vogue editor Kezia Keeble in 1985, and left the Times to start a fashion styling and production firm with his wife and their friend Paul Cavaco. The twist was that Cavaco was also Keeble’s ex-husband and the father of her daughter, Cayli. (Cavaco and Keeble divorced in 1984.) The company Keeble Cavaco & Duka — which evolved into a major fashion-oriented public-relations firm — was set up in two neighboring apartments. Very civilized! Unfortunately, Duka, who had AIDS, died in 1989, when he was only 39 years old. Keeble died the following year from breast cancer at age 48. Cavaco left the firm after his partners’ deaths, went into the magazine world, and is now creative director of Allure. The new owners of Keeble Cavaco & Duka changed its name to KCD.

There was a Vanity Fair article about these folks shortly after Keeble’s death. It made a big impression on me at the time. I would love to re-read it, but it isn’t on Vanity Fair’s website. As I was searching for it, I came across this blog post about a couple who named their daughter Kezia after seeing Keeble’s photo in a 1965 issue of Glamour. 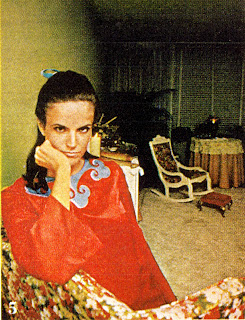 Kezia Keeble in 1965. From Glamour via Bob Bacon’s blog.

Apparently, Cavaco doesn’t do a lot of interviews, but he did one with LookOnline in 2000. His opinion on Alexander McQueen jumped out at me:

“I think Alexander McQueen is really talented. Again, we’re looking at a baby; he’s only in his 20’s, but I think he’ll be great. Someone who’s a baby designer just got thrust into the majors. But, he hadn’t been working all that long and then suddenly gets thrust into the majors and does OK. Was Calvin Klein Calvin Klein in the beginning? We look at these designers really far into their careers and we say they’re great. But, the beginnings are sort of not quite that. Do I always love everything everyone does? No, but do I take a closer look and think that there is a seed of brilliance there? Yes.”

When asked about the Internet and fashion, he was more open-minded in 2000 than some magazine editors were 10 years later:

“I can’t say whether or not the internet will ever replace magazines; the whole world will probably be on the computer sooner than we know. So, it probably will replace, but do I think right now? No, because I think people still want the tactile thing of a magazine right now. Ten years from now? Maybe.”

Read the whole interview here. Coincidentally, the latest LookOnline blog post is a Kenneth Cole review written by gorgeous blogger/designer/friend Stacy Lomman. So my day started out with work on a fashion-blogger story for the Huffington Post, flashed back to the 1980s-90s and wound up with Stacy. Fashion always comes full circle!

You might also like
Ready for my "People of Walmart" Photo Op
This Headless Woman Wants You to Read Stylelist
Jewel of the Month: Emoji-Inspired Meat Cleaver Single Earring
Previous Post: « Even Better Than Peeps: Easter-Appropriate Jewelry
Next Post: Spartacus, Madonna, Aging Disgracefully and YOLO Rings »