In 2007, in a post about Norman Mailer, I mentioned that one of my all-time favorite songs is “Gary Gilmore’s Eyes” by British punk band The Adverts. Gary Gilmore was a murderer who was executed in Utah, by firing squad, in January 1977.  He was the first person executed in the U.S. since the reinstatement of the death penalty in 1976, so it was a big story. His organs were indeed donated and two people received his corneas; The Adverts came out with their single about a fictional transplant recipient in August 1977. Norman Mailer’s book about Gilmore, The Executioner’s Song, came out in 1980. 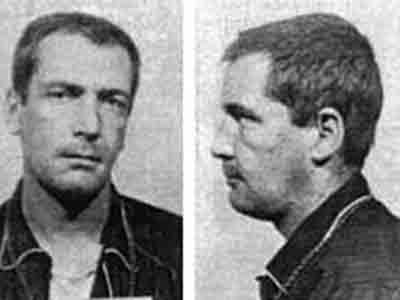 Gary Gilmore. His last words were "Let's do it."

I listen to this song every day at the gym, and every day, I feel amused by Gary Gilmore’s brother’s name change. Every day! It never gets old! Read my old post for more information on Gary’s brother, his name change and his excellent book. Click here to read the lyrics of Saturday Night Live‘s “Let’s Kill Gary Gilmore for Christmas” December 1976 Christmas carol. And here are The Adverts performing their song on Top of the Pops in 1977.

I enjoy other songs about murderers too. One day I should put together a playlist. Today’s not that day, though.