My designing friend Zang Toi had his North Africa-inspired Spring 2012 show yesterday at Lincoln Center. I am madly in love with the model who opened the show — Georgie Badiel of the Muse agency. She came out wearing Zang’s strapless linen jumpsuit with a matching coat that was bordered with 23K gold leaf. She made her turban herself from fabric brought from her homeland of Burkina Faso. 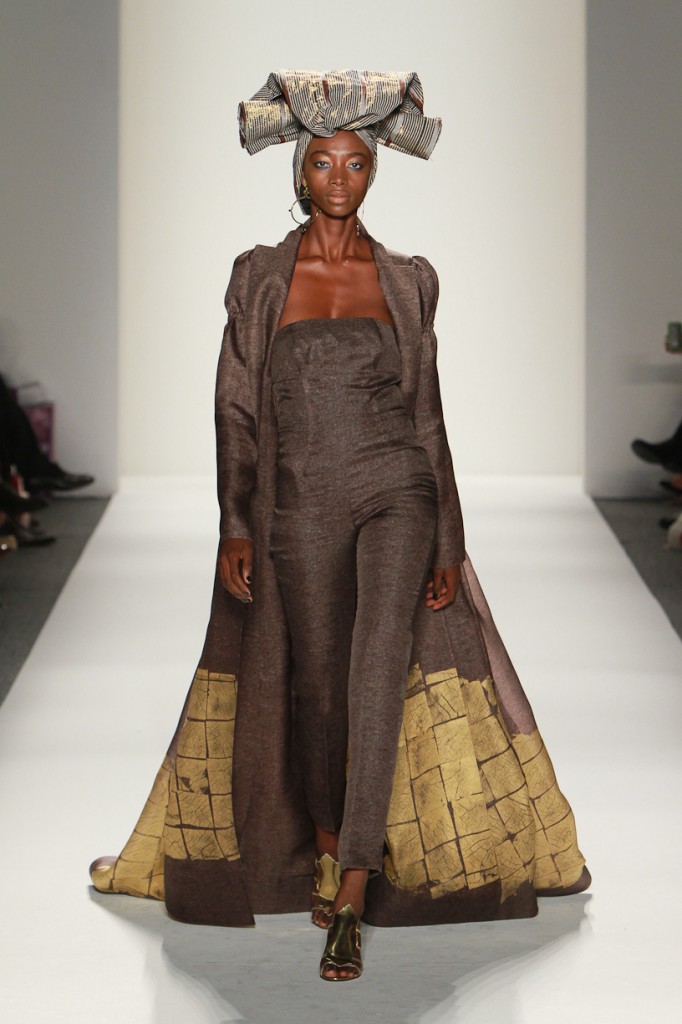 When Georgie hit the end of the runway, she struck pose after pose, with the coat flaring out around her. It was theatrical and fabulous, and much more to my taste than a model with a blank look and limp arms. After all, when you try on clothes yourself, you don’t stand there gaping into the mirror like a dead fish, right? You check yourself out from different angles. I was so enthralled I forgot to take a picture, but you can get a sense of what she did from this photo of her wearing Zang’s black satin gown later in the show. 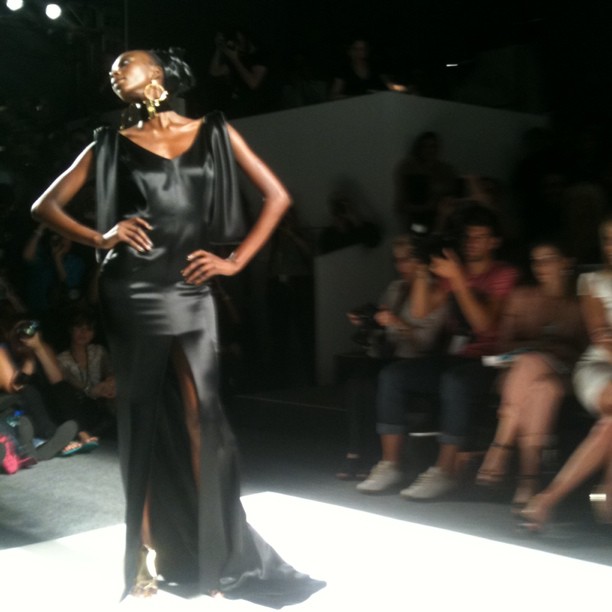 The other superstar model was … Kirstie Alley, who closed the show Surprise, surprise! She looks very regal, doesn’t she? 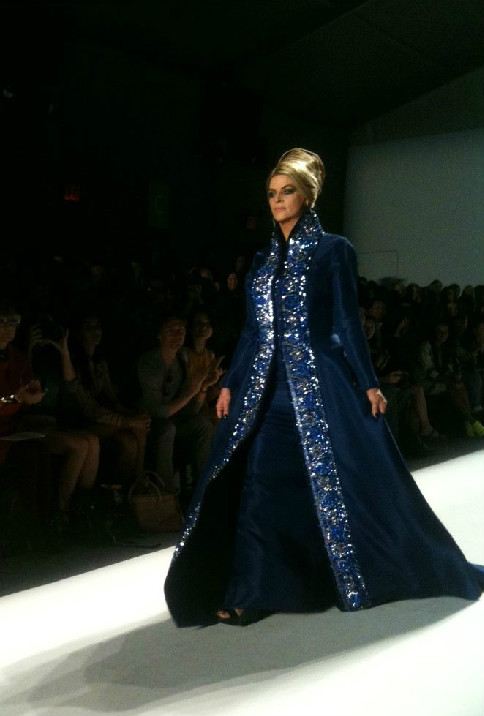 Kirstie Alley struts! Click to see her take a bow with Zang at the end of the show.

Thanks to Kirstie, it was mayhem backstage after the show. Everyone was trying to get a picture of her or with her. 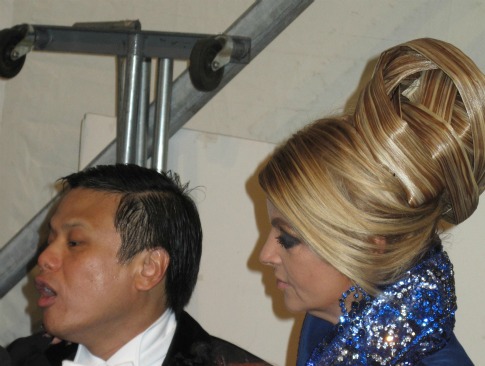 I want to wear a hair piece like that!

MrB and I finally clawed our way over to Zang for our traditional post-show photo. 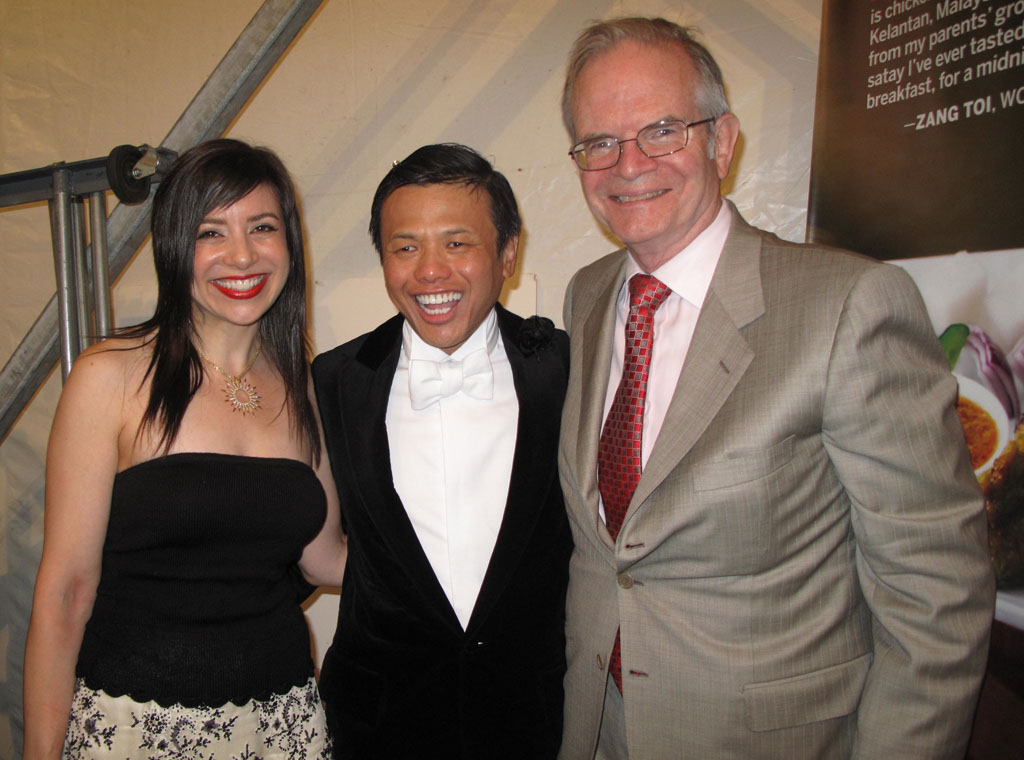 In the audience, Zang’s friends were dressed to his specifications, as always. He’s awfully good at convincing people to wear matching outfits. I think these three ladies should start a Doo-wop group called the Zangettes. 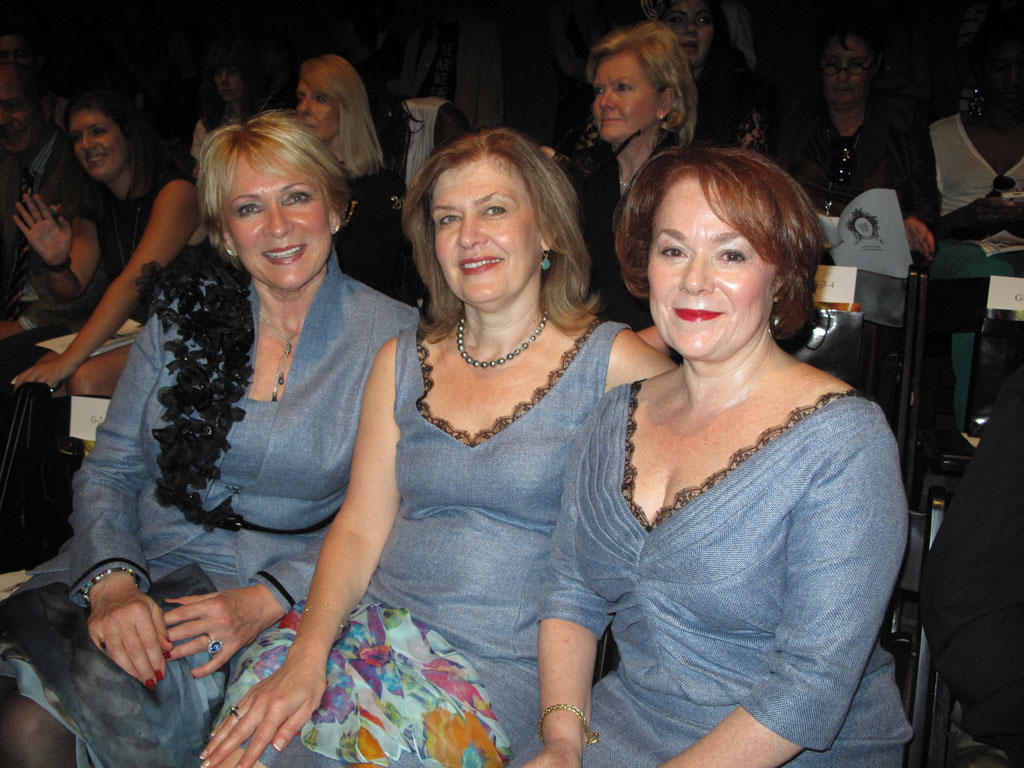 Zang told me to wear a mini skirt I got from him in 2009. I wasn’t positive I was going to wear something so short, but it was as hot as hell and most of my Zang clothes are fall/winter, so I went with it. The strapless sweater is by Zang too. MrB took this picture on the runway after the show. I’m not sure about the length of my hair these days. This is the longest it’s been since first grade! 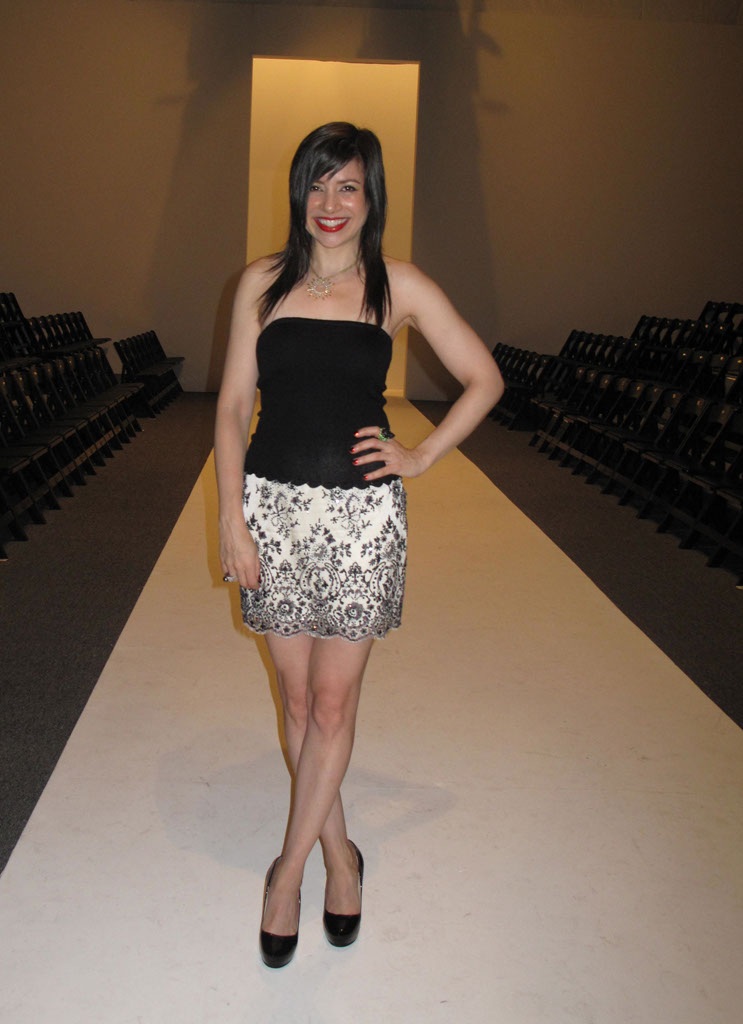 There was a great sapphire-blue high/low hemline, aka mullet gown, in the show. (I didn’t get a good still picture of it but you can see it in my video, which is eerily muted because EMI claimed the copyright for the background music when I uploaded the clip to YouTube. Harsh!) But I’m holding out for the black and purple mullet gown that Zang showed in 2010. He’s going to remake it for me. Imagine — an accommodating fashion designer! Zang really is one in a million.

You might also like
What Wendy Wore: Dolce & Gabbana and Rihanna's Necklace
Great Minds Think Alike ... About Pink Matador Jackets
What Wendy Wore: Embarrassed With Bill Clinton
« In Case You Missed This Weekend’s Posts …
Minx Manicure and a Sneak Peek »