Thanks to your purchases of my Teeny Genie necklace, I’ve sent a check for $1260 to blogger Janet of Je Ne Sais Quoi (as well as a Teeny Genie for her daughter). As you might recall, Janet’s husband took his own life in January, leaving behind no insurance, savings or 401K for his wife and two children. I have been donating $35 for every Teeny Genie sold, and I still have about 30 left, so if you want to help Janet, please click the Genie picture to buy one. 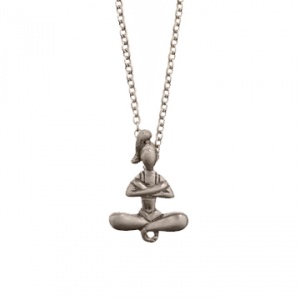 Way back in January, you had also contributed more than $4,000 to Janet directly.

Janet updated her blog on Sunday with a very moving post. It was her birthday on Monday too, so read her post and leave her some good wishes.

UPDATED ON APRIL 7: Janet has made her blog private while she deals with very personal issues in the wake of her husband’s death. You can email her to get an invitation to the blog, but she understandably decided she’d rather not have everything out in the open considering potential employers might Google her.

You might also like
On the Town Epic Post: Celebrating Sex and the City 2
The Winner of the NieNie Auction
Are We Drunk or Do You See This Too?
Previous Post: « McQueen’s Armadillo Inspiration?
Next Post: Having a Ting Tings Moment en Español »