In this week’s post about my 2001 wedding, I didn’t mention my two canine guests, though I’d previously done so. I’m sad to tell you that the second of the two dog participants has gone to the great doggy bed in the sky. My Pekingese, Mr. Chubbs, died in 2006. This Wednesday, my parents’ Pekingese, Molly, was euthanized due to organ failure associated with old age. 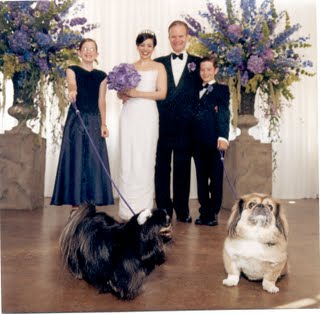 When she wasn’t attending weddings, Molly went to my father’s office. Her duties included sleeping in the bookcase, snoring under the desk, wagging her tail at visitors and occasionally being baffled by employees with video cameras. My father’s employee, Ted, made this little video in February.

She also avidly read all your blogs. 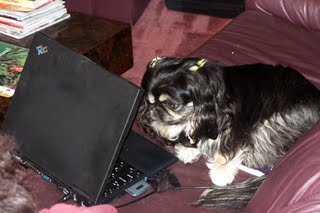 Molly checking on y'all.

MrB and I went to Ohio in 1998 to get Molly for my parents. She was living with a woman who did dog-rescue work after her original owner had gotten too sick to care for her. Molly was supposed to be my mother’s dog, but it was love at first sight when Molly saw my dad. She was quite possessive of him and would sometimes growl at poor BarbaraB if the latter sat too close to GeorgeB on the couch. The heart wants what it wants!

UPDATED TO ADD: I thought I’d move GeorgeB’s comment into the post in case anyone missed it in the comments section: “It’s strange without Molly around. She went to work with me every day for over ten years and made sure everyone smiled at least once during the day. That was her job. She also let me know when it was time to go home. In the morning, Edith who worked in a office down the hall would stop by and she would spend the morning eating [dog] cookies in her office. But she would wait at the door until I yelled, ‘go on go on’ and then she would hop down the hall with all of us laughing.”

You might also like
I Always Thought She Had Good Taste!
Maya Angelou and Massimo Vignelli
Fashion Repeats Itself: Saint Laurent Lights Up
Previous Post: « Francis Graffiti Dress Plus Tights
Next Post: Tavi’s WendyB Polyvore Sets »