I drove by my old Lehman Brothers office building this week and saw that the giant screens on the outside of the building now display the logo of Barclays, the buyer of bankrupt Lehman’s core businesses. 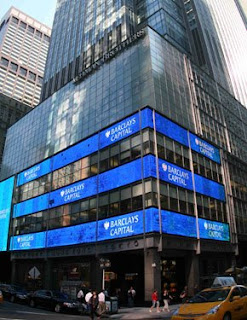 I expected this to happen, yet I was still a little sad. I always enjoyed the flashy display screens on our building. (The building is near Times Square and I was told that all buildings in that area are required to have some kind of bright signage to maintain the Times Square atmosphere.) The screens were so bright that, as you were walking out of the building, it looked like it was still daylight even if it was pitch black out. That always cheered me up on dreary winter days.

Meanwhile, Lehman Chairman and CEO Dick Fuld and his wife, Kathy, are putting some of their art collection up for sale. The missus says this has nothing to do with the fact that Lehman shares, which hit a high of $86.18, are now practically worthless. It’s hard to believe that in 2006, Lehman was “super-hot,” isn’t it?