Anyone who is a fan of the ’90s supermodels (or, as I think of them, the ONLY supermodels) needs to check out September’s Vanity Fair. 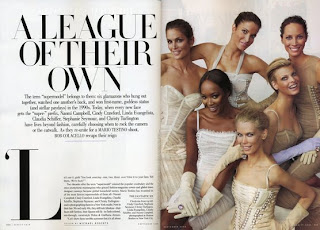 And if you’re too young to remember a time in fashion before actresses dominated magazine covers while wan, bug-eyed teenagers drifted down the runways — a time before Kate Moss, even! — then you really need this issue. Believe it or not, there used to be creatures that looked like WOMEN in fashion. Glamazon women who looked beautiful and powerful, and whom even non-fashion people knew by their first names: Christy, Naomi, Claudia, Cindy, Stephanie and my eternal favorite, Linda. 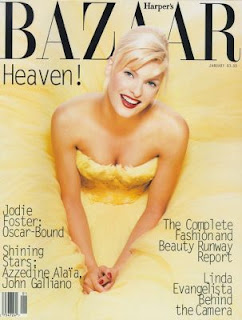 A few bloggers have had good posts on the supers lately. In addition to one from Martirio’s Way , which I pointed out before, check out Dressed and Pressed. I was also excited to see Iheartfashion’s great post on Nadege, who, while she wasn’t one of the “supers,” often worked alongside them, and seemed to be in every runway show for years.

Another model who worked with the supers during their heyday was Carla Bruni, now the First Lady of France and Vanity Fair’s cover girl.

The more I read about Carla, the more I like her. She seems very straightforward and well-spoken. The Vanity Fair story is online. I also liked this Times of London interview with her.

On a much more serious note, the magazine has an excellent story on Zimbabwe. If you aren’t a big reader of the news, and you don’t know about the terror that Zimbabwe’s dictator Robert Mugabe has inflicted on his country, stop being an ignoramus and click the link, dammit. The Vanity Fair piece is a well-written story that will give you some insight into a country blessed with rich natural resources but suffering from the world’s shortest average life span (36) and inflation that was running at about 9 million percent when the author wrote the story. 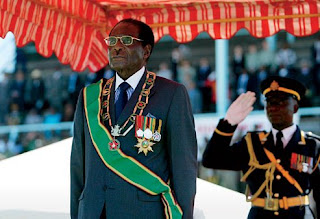 It’s enough to make you believe only the good die young.
Mugabe is 84 and still terrorizing the country.

Speaking of Africa, I beg you that if you speak of Africa, try to know what you’re talking about. It’s bad enough when people don’t know anything about what’s going on in that part of the world but equally irritating to hear people spouting politically correct, but ill-informed, cliches. Recently, I couldn’t help overhearing someone talking about “blood diamonds.” I wasn’t going to say anything, but she went on at such length, seeming to think that the majority of diamonds were blood diamonds, that I finally had to interrupt her to ask if she even knew that the civil war in Sierra Leone ended in 2002. She was so used to the concept of blood diamonds that she hadn’t thought about the specifics of African politics. (Obviously, diamonds from Zimbabwe would be unacceptable if the money was lining Mugabe’s pocket; if they could be used to finance his opposition, that might be different.) As I’ve said before, the leading diamond producers are Botswana in terms of financial value, and Australia in terms of quantity. For your final reading assignment, check out the New York Times story on Botswana, now one of the most prosperous African nations thanks, in no small part, to its diamond ventures with diamond-monopoly-turned-better-corporate-citizen De Beers.

UPDATED TO ADD: I lied. That wasn’t your final reading assignment. You have to read this story about how, while people starve in Darfur, Sudan is exporting food to the Middle East.

UPDATED NOV. 2, 2011, TO ADD: A good story in the New York Times explains how political anarchy and militant group increase the effects of famine in Somalia.