I was thrilled to bits to see that my girl Patti LuPone is getting rave reviews for her portrayal of Mama Rose in the Broadway revival of Gypsy. Some critics are going so far as to say that this is the best Gypsy ever. Ooh, the people on the Bernadette Peters fan forum are going to be riled up over that. They were already feeling threatened months ago. Yes, there is a Bernadette Peters fan forum where people praise her performance in Gypsy and hate on Patti, and I truly did spend at least 15 minutes reading it. That’s either funny or sad, isn’t it? I haven’t decided which. Co-stars quail in the presence of Patti’s star power.

I think I’m going to go see the play again. I went to the preview, but I was totally distracted from the big finale by things falling down from the ceiling and the screams and sobs of an injured theater-goer. 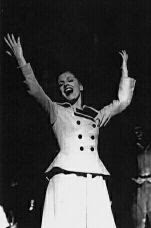 Patti struck the showstopper’s pose in Evita too. It’s a good look for her.

Here are links to some of the reviews.

As further evidence of Patti’s awesomeness, I submit the “Ask Patti” section of her personal website, where she gives terse answers to fans’ questions. I like her answer to the question, “What are your favorite wines to drink?” She said, “Anything that doesn’t come in a box.”
You might also like
I'm Only Anti-Work
What Wendy Wore: Ossie Clark to See Shakespeare
Safety Lessons From Uncle Sam
Previous Post: « Hollaback
Next Post: Clothes Fit for a Queen (or King) »