I discovered Judaysia of A Hair Affair on teh Interweb and quickly realized that she has very good taste, so we got to talking. She has a private-clients-only hair salon in Malibu, but in the ’80s, she designed clothes that were sold at cutting-edge New York shops: Patricia Field, Ian’s, and Unique (my favorite). I was amazed when she sent me this 1986 Details magazine cover featuring her faux monkey fur coat and bikini. I remembered it so well! 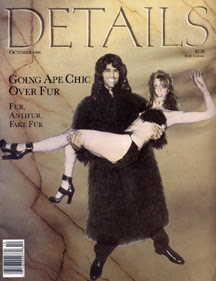 Details is now a men’s magazine, but when it was founded by Annie Flanders in 1982, it was devoted to the wildly creative downtown NYC nightlife/fashion/arts scene. I was a very faithful reader. That scene was HOT HOT HOT, unlike the scene now, and I can say that because I’m crabby and old and everything was better in my day and you kids don’t know anything and turn that damn music down!

Anyway, I had to find out more about Judaysia after that. It turned out she got her start in London in 1983. Here’s her story, in her own words and photos. “I grew up outside Detroit. I started doing hair and designing clothes when I was teenager,” she wrote to me. “I went to London to study hair dressing. When I arrived I found hair and fashion were one. I went to a show at the Hippodrome and all these wild hairdressers were there and clothing designers. I went and found the hairdressers that inspired me after the show and asked them to teach me. It was really wonderful, I met people went to parties and I saw hairdressers shaving heads in these concrete stalls dressed in the most fabulous clothes. People were wearing multicolored hair extensions. I promptly … put some in my head.” 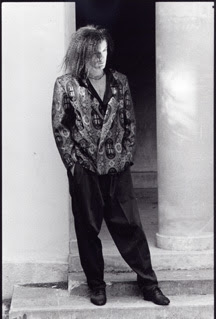 In addition to colorful hair, fashion inspiration was everywhere. Judaysia said, “There were some fabulous designers at the Camden Flea Market. Bodymap was there. I bought some of their clothes. Also lots of unknown designers. I was inspired by Katharine Hamnett, Joseph, etc.”

Judaysia decided to go the DIY route. “I bought old royal velvet curtains, crown buttons, etc. to sew up when I returned to the States. I would sew up my clothes in Detroit and get on an airplane and go to New York,” she said. She’d stay in a friend’s apartment on the Upper West Side, but go downtown to hit the stores. “I would cold call with my one of a kind designs. I went into Patricia Field’s shop and she bought my fur leg wraps and metal knee plates.” For photo shoots, she would put metal scraps from cars into the models’ hair. 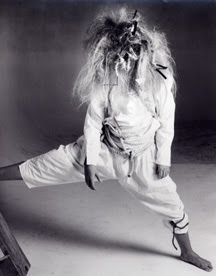 Model Carrie in a white cotton top and bottoms, with car parts in her hair

I hope whoever bought the monkey bikini held onto it. That needs to be at the Costume Institute at the Metropolitan Museum of Art. The bikini was originally a coat with a gold lame lining before it met Judaysia’s scissors. 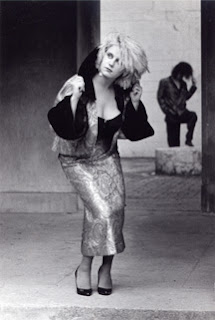 In addition to old coats, Judaysia made clothes out of the fabric normally used for priests’ robes. But my favorite is the car parts. Metal knee plates, peeps! Ahead of Balenciaga by two decades! Below is the lovely Judaysia herself, modeling her own safety-conscious, seat-belt-strap skirt. “I went out to one of the car companies and they gave me a box of seat belts,” she said. 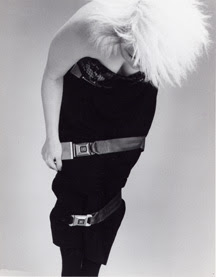 “Fasten your seat belts! It’s going to be a bumpy night.”

The hair woes of some of her customers led Judaysia to her current career. “The Chili Peppers, Sylvester, Mike Peters, The Clash, Richard Butler and a lot of others bought my clothes.” she said. “The rockers would come to me and their hair would be so burnt out. I was making products with hennas, clays and natural herbs to revive their hair.” When she moved to Los Angeles in 1991 to work on movies and commercials, she bottled her miracle hair products and started selling them. I love that one is called Judaysia Holy Water. But I think I want Judaysia VS Shaper Spray, which its inventor also calls Hairdresser In A Can. “It is me in the can,” she told me. “It does everything, shapes, lifts and holds.” Cool! I would love to have Judaysia in a can. I just hope the can tells me great stories about the ’80s too, because I’m going to look pretty crazy talking to a can that sits there in silence.

Want to know more? Get your hair did? Look at pretty pictures? Here are some helpful links:

You might also like
Throwback Thursday: December 2001 Hair
Vintage Leather Shorts, Darling
Huffing and Puffing to Do My Huffington Puffer Story
Previous Post: « Hot Tip for World Leaders
Next Post: Stay Away. 150 Yards Away. »