It’s hard to believe it’s been six years. In 2001, both my husband and I worked across from the World Trade Center at the World Financial Center (we were at different companies though). My company had office space in both the WTC and the WFC, and one employee was killed in the Trade Center that day. His name was Ira Zaslow and you can find out more about him and his foundation here.

My coworkers and I were able to flee north up the West Side Highway. My husband had to exit his building heading south, meaning he was next to the water with nowhere to go when the towers came down. He was caught in the dust. The tie he used to cover his mouth and nose was later acquired by the Newseum.

We weren’t able to go back into our office building until April 2002. I stood on a little terrace on the 9th floor and took a picture of Ground Zero. 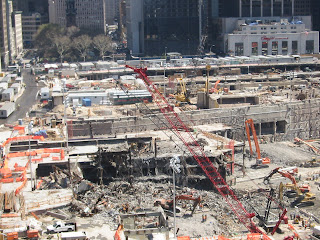 We were allowed in the building to gather up belongings. Our building had suffered relatively minor damage during the attack so things theoretically should have been intact on my floor. But — just to add minor insult to major injury — everything not nailed down had been stolen, down to a fancy pen taken out of its box and spare change stolen from a jar. Whoever took Bumpe, my stuffed cow, was a real ass. What kind of person stops to steal a happy-looking cow from a disaster site? You think s/he would have been content with my laptop. 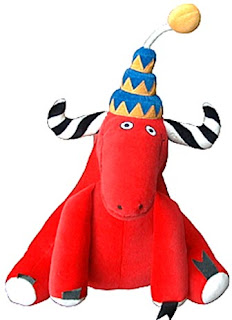 Bumpe is available at quincyshop.com
Anyway, here’s a shot (out a window, pardon the reflection) of the 2002 memorial service at Ground Zero. 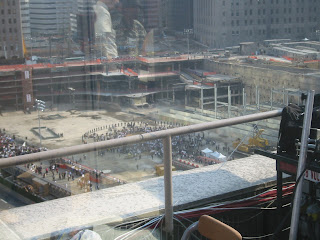 If you would like to find more information online about the people lost that day, Legacy has a permanent memorial. To learn more about the news coverage of the event, I recommend Running Toward Danger. Other books include:

UPDATED TO ADD: Bumpe’s creator read my post and sent me a replacement Bumpe. Read about it here.