This makes me happy, not only because I love ground-breaking women, but also because the Yeoman Warders (“Beefeater” is a nickname for the Yeoman Warders) protect the crown jewels. And you know how I feel about jewels! As for the Tower of London, some people think of it only as a prison where Anne Boleyn was beheaded, but it also served as living quarters for royalty. In fact, Anne Boleyn was housed in the Tower of London as an honor before her coronation … only to return there under dire circumstances just three years later.

Believe it or not, I have a photo of my Xenobia ring visiting the Tower of London. The ring was ordered by my gorgeous client Angela after I’d already left for London, so she asked me to show it the sights. 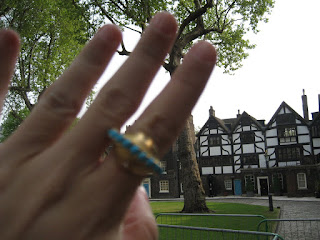 If you go visit the Tower, don’t mess with the ravens! They’re as big as Thanksgiving turkeys and they bite! 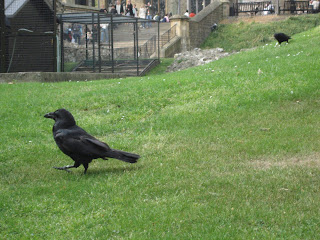 You might also like
Customer of the Day: Laura and Her "Heart You" Earrings
Jewel of the Month: Queen of Scots Snake Ring
Melissa Goes Gamine
Previous Post: « Strawberry Alert!
Next Post: Go Ahead. Be a Big Girl’s Blouse. »