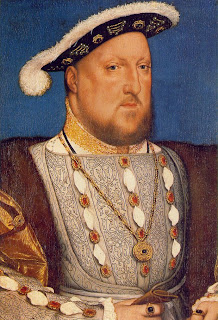 I’ve been wondering whether I should start working on the six wives of Henry VIII. There are scores of books about the ladies in question and Henry himself. Then there are Henry’s children too. This could take months! But I’ve decided it’s not going to get easier if I wait, so here we go. Before you take on all the queens, it’s best to know something about Henry. That’s his handsome mug at the top of this post. Below is his canine namesake, my pooch Henry.

Do you see the resemblance? No? Come on! They are both portly, red-haired gluttons with peevish expressions.

Anyway, there were originally two books called “The Six Wives of Henry VIII” — one by Antonia Fraser and one by Alison Weir — but seems Fraser’s title has been changed to “The Wives of Henry VIII.” I’ve read both books and it’s very difficult to recommend one over the other, though I prefer Fraser. Weir’s “Henry VIII: The King and His Court,” which I haven’t read, seems to cover a lot of the same territory. (Both Fraser and Weir are alarmingly prolific historians.)

If you’re interested in historical fiction, Margaret George’s “The Autobiography of Henry VIII: With Notes by His Fool, Will Somers” is amusing and relatively sympathetic towards Henry (He couldn’t help himself! He had bad parenting!). Though after reading a lot of historical fiction, titles that include “autobiography” and “secret diaries” make me want to fall down laughing. Can’t anyone just write a novel? Does it always have to be a “journal” that was hidden in a planter or down a jester’s pants? Jebus! When it comes to George, I infinitely prefer her Mary Queen of Scots book, but that is a post for the Mary Queen of Scots week. There are many more Henry books you could read, but you’re going to get PLENTY of Henry as you read about the six wives (and three children), so these should suffice for now.
(Henry VIII picture from artchive)

You might also like
Henry Reads the New York Times
The King Is Dead. Long Live the King.
Jewel of the Month: Queen Min Earrings
Previous Post: « The San Francisco Treat
Next Post: Something’s Fishy »